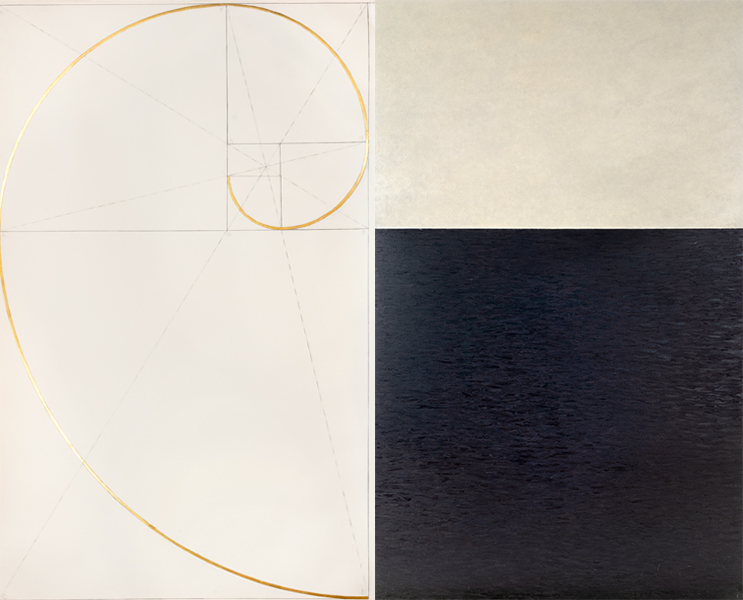 …How does Marija Dragojlović “intervene” in the canonical representation of art history, such as a painting of the sea? What is the theme of her latest paintings? Are they seascapes? There is no topography in these large canvases. Without a title, it is not possible to distinguish which are these seas or even whether they are representations of the sea at all. In some of her earlier cycles, the sea was the subject of direct observation, a subjective experience of the atmosphere, a smell and noise of an experience, a detail of intertwined personal and collective history… She has never been on the Sargasso Sea. This makes it an imagination of the real space, a snippet of the imagined reality.

When she explains why these seven seas, Marija Dragojlović mentions the North Sea as her great love, as wind, cold and rain. She believes that the names of the seas are significant per se. Looking at them, following the etymologies of the names, she simply sees some of them. And some she does not. She sees the Black Sea black. The Red Sea red. The Sea of Marmara is marble, Istanbul, Constantinople, Byzantium… The Dead Sea causes discomfort at the thought of dead water, halted. The Mediterranean Sea is infinitely blue and hazy from the heat. It is her “chalk circle”. She became fond of the Sargasso Sea a long time ago. Without explanation, as a premonition of the uniqueness of the only sea with no shore. There are, of course, eels, their travels, spawning in the great depths in which they die. That story sounds like a fairy tale to her. Then visually, the ochre algae that float and, at sunset, have a golden glow of bubbles that keep them afloat. All of the mentioned is completely and deeply personal, without explanation. She wonders why we love someone and something at all. All seven seas are painted in one geometric, strict story – “as if I set the coordinates so as not to get lost”.

Marias’s seas, although not classical, are geometrically controlled; abstract representations of an unlimited space where horizontality is equated with sublimity. In Heade and other luminists, we find the belonging spirit of the time, “the idealization of nature simultaneous with industrialization; faith in the inevitability of the future and selective remembrance of the past.” What does the controlled certainty of the golden ratio mean for Marija Dragojlović in the time of environmental disasters, megalomaniac projects and the future whose inevitability has been replaced by uncertainty? In these paintings, as before, she looks. She watches attentively. This time, however, the subject of that gaze is not the surrogates of human presence. Inversion is also noticed in the approach to narration. If previously small things were monumentalized, now big ones are translated into intimate. Before, objects were enlarged, while the seas are now “reduced”. She’s reached for the coordinates “not to get lost”, searching for the “line of the golden ratio and the divine proportion”. And where else could – she wonders – be the starting point of that path if not in the sky and water, the origin and the beginning of everything, the perfection of relationships, a look that is always fixed on the horizon… (from the text Letter S: S: Sargasso Sea, by Simona Čupić.

Marija Dragojlović (1950, Yugoslavia) graduated and obtained a master’s degree from the Faculty of Fine Arts in Belgrade in 1977; based in Belgrade. She has had several solo exhibitions and participated in numerous group exhibitions in the country and abroad.

The awards she has won include the awards for painting at the October Salon in 1984 and the Nadežda Petrović Memorial in 1984, the award from the Ivan Tabaković Fund in 2007, the Politika Award from the Vladislav Ribnikar Fund in 2010 and the Sava Šumanović Award in 2016.