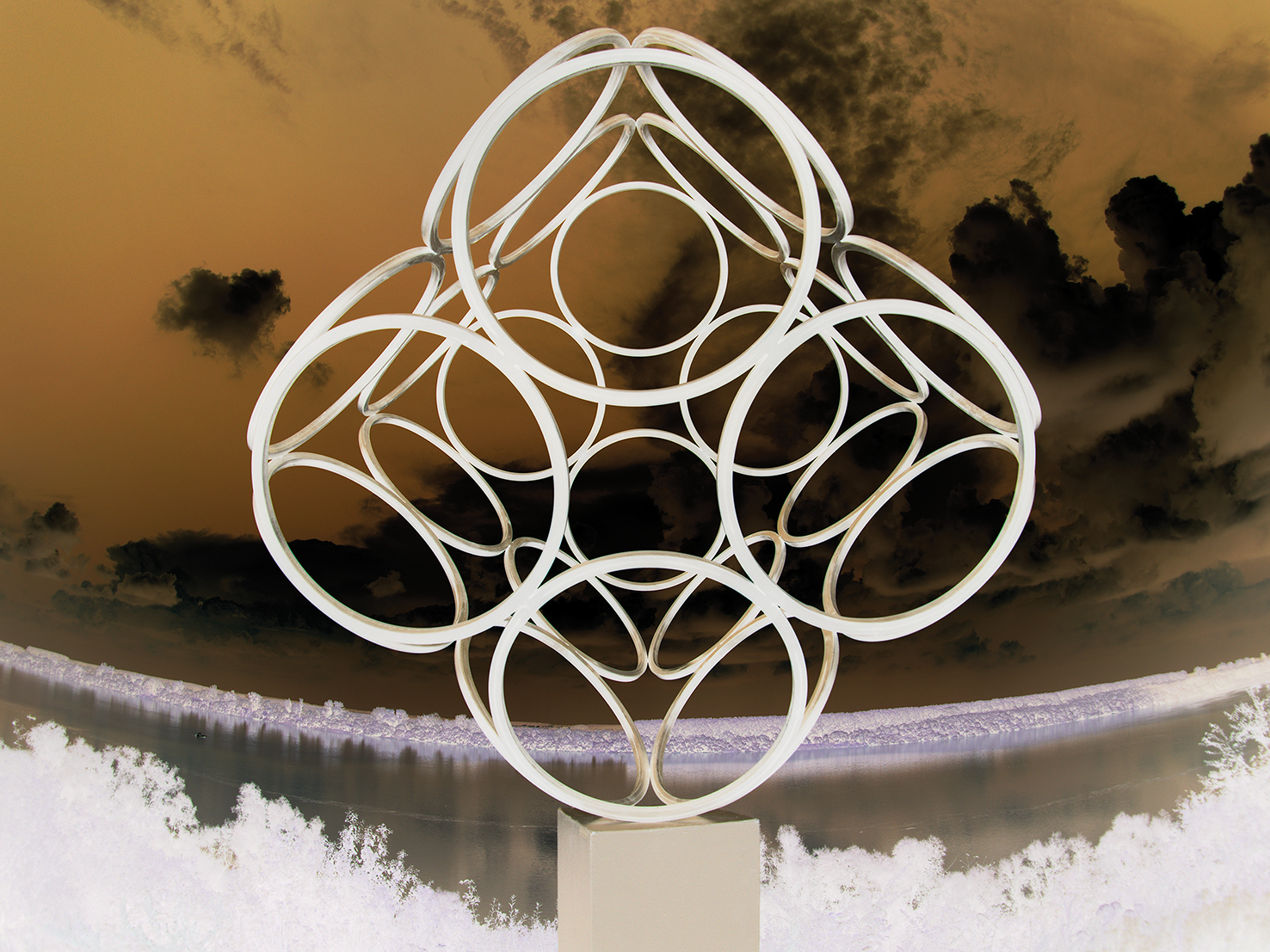 Quadrature of the Circle

(a perspective on pieces by Aleksandar Gligorijević)

What we have before us is a new art object: assertively subtle, a logical apory, visual invention. Throughout the decades of his activity, Aleksandar Gligorijević has sought to identify the common denominator of his unique artistic method. The artist’s practice blends composition of elements, scientific and technological applied knowledge and industrial design into pure sculpture. This seemingly simple definition is something that Gligorijević is bound to face again and again. Thus this new output may be perceived in the context of this artist’s wider visual research. The essential question of Aleksandar’s dedicated quest for plastic expression may be posed in the following way: how this field of “pure sculpture” may exist in this postindustrial world of ours?

The interplay of functional elements’ visual fragmentation comprises Aleksandar’s main poetic principle embodied in the medium of sculpture. What made his earlier artistic objects realistic is their cultural transcendence to where science and design become art. The artist has spoken of his insistence on representing the specific postindustrial culture, sublimated through functional components of design. His strategy of fitting and joining mechanical elements neglecting the logic of the original form, creates his own personal alchemy: starting from applied knowledge of science, technology and design, to attain sculptural forms. The meticulous craftsmanship and abundant technical work, often invisible, have been preconditions for the creation of precise devices – assemblages. These enabled Aleksandar to actualize his own kind of eclectic compositions. Throughout years, these hybrids exuded the specific visual identity of his sculptures, which may be defined as his unique personal style.

This quest may also refer to wider fields of art and aestheticism: in case one refers to the affirmative aspect of art, not the art as negations, allegories, or criticism, but rather a description of the art which directly influences the world in which it is contained, this is the definition of art which is by no means based on representation. In this sense, Aleksandar is dedicated to creating sculpture which does not intend to represent anything from the visible world. When it comes to this line of research of the concept of progress, art history narratives of the 20th century rightfully questioned the ethics of art, which dispelled illusions concerning “purity” of any art. Reflecting the specific Euro-American art history and practice, this genealogy ascribes modernist ethical shift to 20th century masters Marcel Duchamp and Constantin Brancusi. Such approach to making art objects, also pursued by Aleksandar, implies the world that we live in – our social and productive environment, our political hierarchy – though it may not be representative of it.

Adhering to such beliefs, the artist continued with his quest to encapsulate his own unique artistic method. Let us return to the object, exhibited thus that one is expected to dedicate some prolonged period of time to observing it – why do we refer to it as to a visual logical apory? In philosophy, apory is philosophical puzzle or seemingly unsurmountable obstacle in a research, often occurring as a result of similarly credible, yet likewise inconsistent premises (i.e. paradoxes). The term may also designate the state of confusion inherent in such puzzles or obstacles. The concept of apory can mainly be found in Greek philosophy, yet it is also present in poststructuralist philosophy and texts by Jacques Derrida and Luce Irigaray.

Contemporary academic studies of this term further define its use in philosophical discourses. In his book Aporetics: Rational Deliberation in the Face of Inconsistency (2009), Nicholas Rescher deals with the methods in which apory, identified  as an attempt to synthetize and systematize aporetic process in solving information overload (cognitive conflict, as is sometimes called).

Today, when this text introduces Aleksandar’s sculpture, as the present is fraught with difficulties and connotations, it seems that it is more than ever necessary to consider catharsis by means of logic, perception and the discipline of inference. Let us return to the following definition of apory as: “any cognitive situation in which the threat of inconsistency confronts us”. Whether this artistic object enables us to reset from the inconsistencies of perception and reasoning? Aleksandar refers to sculpture as to something absurd, that which simultaneously is and is not – a cube made of circles – an impossible geometry. However, it seems that he does not wish this sculpture to deceive the observer. On the contrary, he perceives it as an agent that introduces an opportunity for one’s personal visual and cognitive relationship with the absurd. Apory is thus not the end of the road, or an impasse, but quite the reverse – it invites cognition and imagination which take one ever further.

With analytical precision, Rescher further elaborates on his specific conception of apory, by qualifying as the concept of “a group of individually plausible but collectively incompatible theses”, which he illustrates with the following syllogism or “cluster of contentions”: 1. What the sight of our eyes tells us is to be believed; 2. Sight tells us the stick is bent; 3. What the touch of our hands tells us is to be believed; 4. Touch tells us the stick is straight. Apory of this syllogism lies in the fact that, even though each of this contentions is individually conceivable, together they are inconsistent or impossible (i.e. they constitute a paradox). Rescher’s study indicates continuous presence of scientific studies on the concept of apory and contemporary attempts of analytic philosophy to translate this ancient philosophical concept in order to describe its modern meaning. It seems that the sculpture before us claims clashing premises when observed from different perspectives, that these are all individually conceivable, yet they are impossible as a whole. The artistic vision is a signal which appeals for the importance of logic, but also the possibility of experiencing the beauty of paradox. The piece we have before us has the noble role of reminding us that logical thinking and beauty are bound by the ethics that shields against chaos and madness.

In the end, I invite the reader to remember the conceptual drawings of circles inscribed in rectangles by Sol LeWitt, who is rightfully perceived as the originator of conceptual art in 1960s and 1970s. For him, as well as for other artists of his generation, idea was the most important aspect of a work of art. Yet even more important were the intimate, timeless processes of drawing, which merged one into another and generously opened up avenues towards the observer. The legacy of 20th century conceptual art teaches us to value each artistic action as a permission of the existence of the absurd – of what both is and is not – and to accept (and rejoice in) the incapability of language to preconceive visual outcome. Thus straight and curved lines may create new forms, rectangles and circles before our eyes, materially actualized in real life (RL), but also in virtual reality (VR). What constitutes the artistic imperative is exposure to the observer, opening of imaginative fields which continue to nurture thinking and imagination. This may in fact be the only way to solve the problem of the quadrature of the circle.