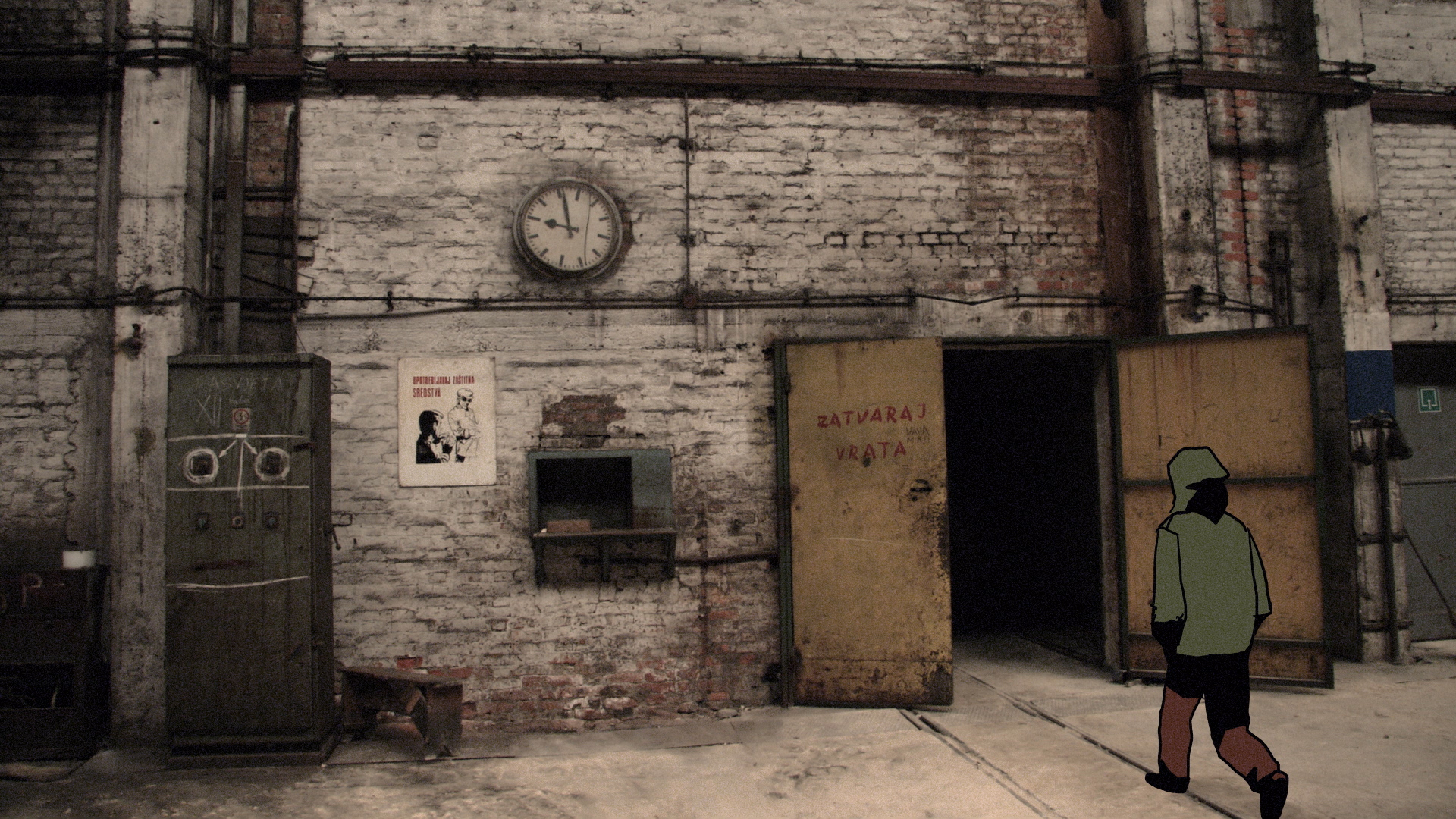 The exhibition combines the works shown at the last edition of the Biennial of Contemporary Art in Venice with the film Monument-  nine portraits of significant monuments from the period of socialist modernism and the video Angels with Dirty Faces (turning point) that talk about miner’s protest in Kolubara in 2000. Author’s strategy constantly draws attention to the importance that art has in the processes of documenting changes and places of trauma. Following the social, political and generational shifts and changes in the public spaces and social relations, the works speak about consequesnces of privatization, urban gentrification and transition. They highlights the new situations that are coming to replace the old and invite us to think about future ways of imagining and inhabiting our world.

Traces of Disappearing – Waiting for the fourth act

In-between European lock-downs and the global-scale epidemic, for the economic recession and all-present new normal Igor Grubić’s installation Traces of Disappearing (2019) seems to have predicted the future. It was exhibited for the first time at the 58th Venice Biennial exhibition of the contemporary art, just a few months before the pandemic has started. Images of suburban thickets and shelters, closed crafts shops and decaying industrial plants as well as post-industrial landscapes devoid of any human presence acquire a new meaning after the worldwide first experience of the lock-down and the curfew. That is probably the most visible in the opening scenes of the animated movie How the Steel was Tempered. Two protagonists and their dog come to the abandoned factory passing through deserted and mellow landscape. Disappearance in question is not only that of the age of modernity and its upsurge in industrialization and of never completed and thus permanent economic transition accompanied with political normalization but, perhaps, of the human existence itself.

Part of the installation is set in the archival cabinets, originally meant for the safekeeping of photos from the light and UV rays. Transfer of the historical memory, safe in the darkness, is the subject of the cycle of artworks titled after Azra’s LP Filigree Sidewalks. It is the photo essay that deals with the disappearance of the small craft shops in the Balkans. Traditional crafts, impregnated with the Ottoman or Venetian influences in that area acted as catalysts for the transfer of the family heritage. At the same time they give way to the aggressive transformation of the cities and urbane economy becoming tourist scenery and offering one-time experience short-cuts for short-term visitors.  Photo sequences move in close succession – starting with the closed, shuttered, metal doors leading to the spaces that are for sale. Beyond modest metal portals once there were barber shops, bakeries, tailors, little filigree shops, quilt shops, fur traders, illuminators that have lost customers to the mass produced goods. Grubić’s photo essay is not only dedicated to the some age predating industrial one but it also summons the spirit of the British writer, art critic and historian and the civic activist John Ruskin, who, one hundred and seventy years ago, in the midst of the “second industrial revolution”, wrote his masterpiece “Stones of Venice” – in which he doesn’t only deal with the Venice architecture but also with the age before industrialization of the labor. According to the Ruskin, that was the age when crafts were unique and respected, set on common good and space. He recognized this in the style in which numerous town halls in historical European communes were built. That style was Gothic, the style that in its name bears an allusion to the fall of the Roman Empire. On the other hand, just like Venice, who in a good part has also has inherited Byzantine tradition, that has, for centuries, bordered, warred and traded with the Ottoman empire and through whose ports, harbors and warehouse the Levant met the Europe, places bear the history of the migration and urban renewal in which alleys, towns and fairgrounds came into being on the outskirts of entrepreneurial, migrant international of Albanians, Jews, Roma people, Aromanians and many others. Appropriating the title Filigree sidewalks, Grubić enhances tiny nature of those urban landscapes and textures, materials and historical strata.

Shanty towns, as spaces of the everyday life built on the outskirts of urban planning has now gone international or better said recognizable on the global level. These are spaces of ramshackle temporary settlements, illegally built hovels that are, in the spirit of recycling, just necessary landscape interventions made of used, thrown-away materials. Once again they recall Ruskin’s ideas but this time reasons are ecological. Self-organized homeless settlements are in their imagination and reflection first kin to the great works of architecture, with an added quality of self-sustainable vegetable plots, gardens and gazebos.

Grubić follows socially marginalized people and in their temporary houses, recognizing in their self-organization and home solutions some of the fundamental values in the architecture. He perceives owners and residents of those houses as exceptionally skillful architects. Warm interest in the lives of others, respect for their personal space and the highest level of respect for the human dignity that Grubić shows in his photos that, before anything else, try to point beauty, originality and the accomplishment of those temporary structures. His accompanying texts are brimming with desire not for the trophy hunting but for the honest and humane relationship with the residents of those spaces. Just like in the prior act in his work, gentrification and real estate speculations have their own special place providing interventions in the landscape that is marked only by modernist skyscrapers with the roofs used for advertising and transmitters. It is a specific architecture of warehouses and big blockbuster market chains with their neon signs dotting the landscape regardless if those corporations are still existing or have bankrupted. Nested between the river, commercial district and the city detour temporary settlement has all the traits of the non-place that appears on the margins of the global capital spreading through the cites in which the gap between the rich and the poor widens and which, while climate catastrophes and real estate speculations destroy their structures, still hurl irrepressibly onward.

Third act, Deconstruction of the Factory, was shot in the abandoned industrial plants, among others in the Sisak steelworks. Sisak was the poster city for the industrialization and industrial development and, incidentally, for the emancipation of the working class. Grubic, by shooting abandoned factory halls, discovers in them cathedrals and basilicas thanks to their lightning and elongated middle sections. Broken windows whose various colors of the glass denote different stages of neglect stand for abstract stained glass. Once spaces of labor, in the strict sense of that word, with the changing of the political system and through economic transition and mysterious ways of nationalization of the common social property via meandering coupon privatization have been left to the creeping ivy and to the another marginalized social group – scrappers that are taking from old plants anything, primarily iron and steel, they can cash in. In the cultural initiatives that temporary inhabit abandoned factory plants and in joint actions by cultural workers we can intimate a flame of some new hopes and not just the threat of the gentrification.

In the exhibition setting through didactic panels and carefully presented archives, these photo-essays invoke the ghosts of the factory offices and lobbies and not the spirit of gallery or museum spaces. This structure that abolishes any spectacle or unnecessary drama reducing the image to the non-representational visual information like terrain scan or a movie sketch is juxtaposed with the overly emphatic and personal tone of the accompanying texts. That is why the second part of the exhibition, animated feature How the Steele was Tempered evokes the heroic age of the not only the industry but also of the film-making, when film journals gave moral-boost to the workers. It starts as the dystopian narrative. Entering the factory halls we move past bygone glory and through compact version of personal relations and individual fates that present us with the dissolution of the collective. Nevertheless by the end – in spite of conflicts and disappointment – faith in the collective endeavor persists. How the Steel was Tempered was shot in the nine factories in Croatia. In the abandoned factory halls, still bearing visible signs of the presence of workers, it introduces animated figures, father and son. Older man remembers his hard work while the younger man lets it go in the reckless games in the abandoned factory plant. Intertwining of the documentary shots, long takes of the factory halls, with the precise animated figures and animal characters (who, unlike humans, talk) and through movie within the movie that introduces propagandist joining of the images of young boys and girls doing voluntary work with the partisan war song leads us to the final switch. Generational conflict is solved when the flame is rediscovered that will, at least metaphorically, give new life to the slumbering giants. Photo essays, devoid of human figures look like movie stenography and provide historical and spatial context to the animation but also give us hope. Through this testimony of the dissolution and disappearance maybe in some imaginary elliptic construction better tomorrow will be born.

Igor Grubić (b. 1969, Zagreb) is one of Croatia’s most accomplished and internationally acclaimed artists. His work includes site-specific interventions in public spaces, photography, and film. Since 2000 he is also working as a producer and author of documentaries, TV reportages and socially committed commercials. He represents Croatia at the 58th International Art Exhibition – La Biennale di Venezia with the long-term project Traces of Disappearing (In Three Acts) and the short, experimental documentary/animation film How Steel was Tempered, which has received several awards, including: Special Mentions at the Anilogue International Animation Festival and ANIMAFEST, as well as Best Professional Film at “ASIFA-Croatia” (2018).

His interventions into public space, along with video works explore past and present political situations while cutting through the fabric of reality. Grubić’s critical, socio-politically committed practice is characterized by the long-term engagement and investment into the subjects he chooses to work with. From the in-depth exploration of the fate of historical monuments and the demise of industry, to examination of the predicament of minority communities, his projects unfold over several years of research and grassroots, personal relationships. Though grounded in the documentary tradition, Grubić’s work in photography and film is characterized by an affective and empathic approach, which is deeply humane and often poetic.

His work is included in the collections of TATE Modern, the Museums of Contemporary Art in Belgrade and Zagreb, Muzeum Sztuki, Kadist Collection, Kontact Collection, Art Collection Telekom, Collection October Salon among others.