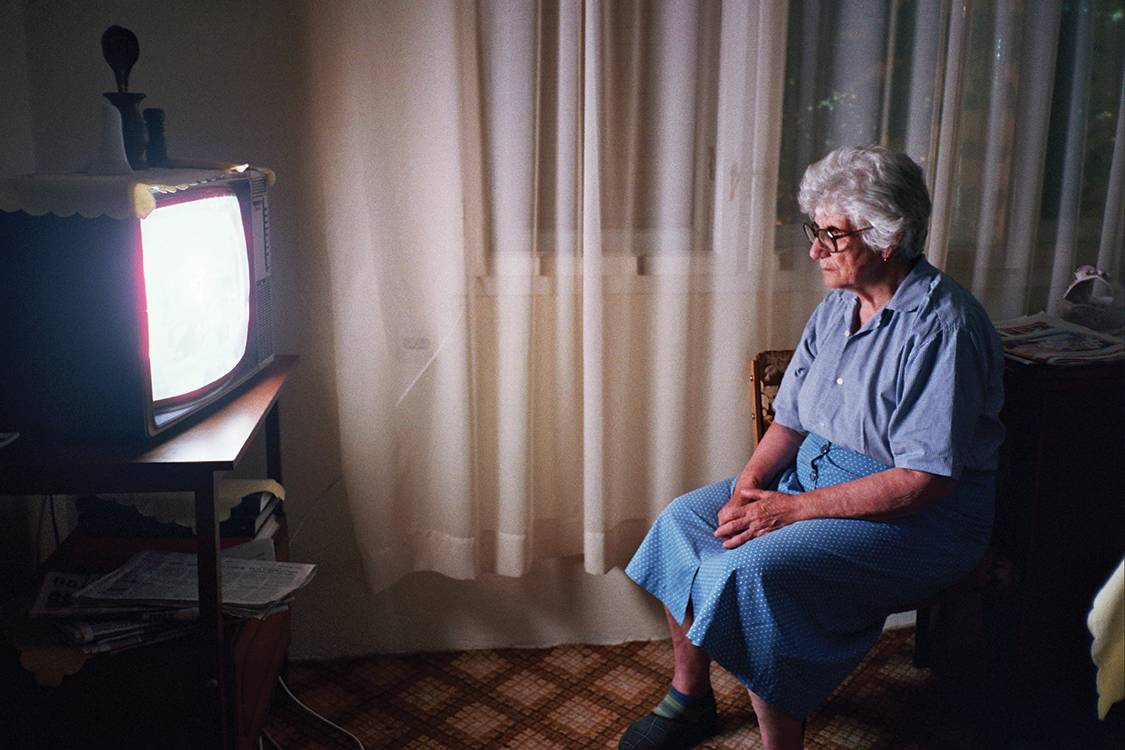 In the 20th jubilee season of the Artget Gallery, in which the artistic directors of the Gallery in the previous decade re-map the domestic scene with one selected exhibition, Slađana Petrović Varagić and Miroslav Karić present photographic, film and video works from Dragica Vukadinović’s Archive – Her Personal Works.

“One’s Own” View of Things
Contributions to the local and regional contemporary visual art scene in the professional career of art historian Dragica Vukadinović have been significant. Among them is the heroic endeavour of the retroactive establishment of the Belgrade Student Cultural Centre Archives and the pioneering role in the affirmation of photography. The mission set in the early eighties, when she moved away from “mainstream” conceptual art, seeking her “siding”, appears to have been accomplished in an unpretentious way. It is interesting to follow what happened on that “siding” and how those “minor” and “less important” media she mentioned (comics, photography, illustration) were not only introduced into the exhibition practice of Srećna galerija [Happy Gallery] (SKC) but became a new “mainstream” due to the specific social context and her significant contribution. She belonged to a generation that was looking for different types of discursiveness, that sought to articulate a new identity related to the media themselves – photography, fanzine, music (New Wave, rock), a new scene of the youth/student press (Polet, Omladinske novine, etc.).
Simultaneously, she developed her own art production, which was rarely exhibited in ad hoc group exhibitions organized at Srećna galerija as a sort of subversive commentary on the programme of the (big) SKC Gallery. Trained to read and interpret visual representations, Vukadinović approaches the medium “non-observationally” and through experimental procedures. Her rich opus, unknown to the public, consists of photographs, 8mm films and video works. For the past five decades, she has structured her own production into a personal author’s archive, valuable both in an artistic and cultural sense.
Following her passion for the medium of photography, we follow the development of the medium and its technological changes, but also the context in which her work has been created – from the time when photography was a “subject of desire”, when without having a camera, taking a photo itself was an “event”, a collective act of setting the scene in an automatic photography machine; from the use of Polaroid instant technique; the photograph as a material object, to today’s digital record, which is no longer Metz’s “silent rectangle of paper” but a binary record that radiates from the screen.
Her first photographs – photobooths were created as documents of performative behaviour and mild exhibitionism together with Gojko Škarić, Zorica Lojpur Bogdanovski, Ljubica Seka Stanivuk, Rusomir Bogdanovski and Tomislav Gotovac. Testifying to the fascination with the photographic medium in the entire generation, self-portraiture as an act of reflection, self-affirmation or building social status, these photographs also have an anthropological character. According to Jeff Wall, such “photoconceptualism” is interpreted as a radical critique of modernist authorial approaches and aestheticization within the medium of photography . This “…new, fresh way, beyond the worn-out criteria for photography as sheer picture-making.” is also applied in Polaroid, which enables the introduction of the private and intimate. One of the Polaroid series is a dialogue between two life partners – Dragica Vukadinović and Gojko Škarić. The Polaroid 100 technique (generation before the SX70), with the possibility of double exposure, allowed them to experiment within the action itself. Polaroids presented at the exhibition Foto-sekvence [Photo Sequences] (1979) under the pseudonym of Juliana Negulescu, purchased for the Dragiša Mišović Hospital, are lost today, and this situation, through integration with the text, brings closer the idea of a photograph as the “anti-object”.

The author’s frequent motif is self-portrait – as a performative place or a kind of self-therapeutic communication with images of selfhood. The pair of Polaroids Naked and Dressed from 1980, represents the author, naked and dressed, in a sitting position, with the famous book Pictures on a Page: Photo-journalism, Graphics and Picture Editing by Harold Evans in her arms, serving to identify the author’s role as a curator of photography, while the performative play with dressing and undressing indirectly speaks of a ludic trait in her character and the will to try the medium itself. Further insight into the archive introduces us to the tendency towards autoerotic, and the creation of “do it yourself” indicates the limited availability of these shots to the views from outside.

Portraits of family members, close friends, colleagues and artists (from and around SKC) are present in large numbers in her work, while this series is often supplemented by photo-recording of intimate performative homages to certain artists (e.g. “For Era Milivojević”). Transferred from the private to the public space of the gallery, in the form of an installation, family portraits in their authentic frames, testify that the author translates the fragility of her own memory into the power with which she shapes the family album. Within this genre (and landscape) she often applies the composite form, a method of playing with perspective and expanding the frame. Possessing extensive knowledge of various practices in the history of photography, she has often experimented in her work, either in the act of shooting and framing, in computer processing (photo-editing, polyindrome, diptych, polyptych) or in using photography (collage, assemblage). Today, she is especially dedicated to experimentation and manipulation of moving images (video diptych, polyptych). Her recent video-records in the style of static observational video landscapes are deprived of the presence of man who (over)inhabits her photographic frames and early moving images, but they are also a symbolic self-portrait of the author.

Dragica Vukadinović’s exhibition at the Artget Gallery in 2021 presents fragments from her archive of personal works – complex forms in content and possible interpretations since it is made by combining her various engagements and her presence on the scene as an active participant in local cultural and artistic circumstances, a dedicated archivist and author whose artistic production is still waiting for further research, historicization and positioning in the context of the development of photographic medium and video art in our country.
Miroslav Karić and Slađana Petrović Varagić

Dragica Vukadinović (Raška, 1949) graduated in art history from the Faculty of Philosophy in Belgrade. She worked at the Student Cultural Centre (SKC) from 1971 to 2012, first as an assistant editor for the Visual Art Programme, then as the curator at Srećna galerija [Happy Gallery], and the editor of the Documentation Programme, where she retroactively collected documentary material and established the SKC programme archive and database, began digitizing materials and edited the SKiC Bulletin. She has organized exhibitions, produced works and written about artists such as R. Todosijević, Z. Popović, M. Abramović, N. Paripović, E. Milivojević, G. Urkom, D. Papić, N. Bračić, G. Matić, T. Musović, V. Jovanović, D. Vlajić, G. Basarić, K. Bogdanović, V. Macarol, B. Debeljković, E. Ionesco, M. E. Mark, A. Leibovitz and others. Besides writing for exhibition catalogues, she has published articles about comics, photography, graphic design, and the image of woman in the daily press for the magazines Moment, Reporter, Foto kino revija, Svijet, Osmica, Beorama, Presarijum, SkiC. In the 1980s, she realized the YU Competition for rock photography, and supported the production of new wave and rock fanzines. She received the Lazar Trifunović Award for art criticism for her text “A Place in Space” in the monograph Branibor Debeljković, Retrospective (Nadežda Petrović Gallery, Čačak) in 2002.
From 1999 to 2005, she worked on forming the AŽIN feminist IDOC Centre, established an electronic database and edited the Presarijum Bulletin. Currently mainly engaged in photography and videography. Her artworks have been presented in two solo and several group photo exhibitions. She publishes her works on free internet platforms.

Slađana Petrović Varagić, art historian. She graduated from the Faculty of Philosophy, University of Belgrade, Art History Department, and holds a master’s degree from the Faculty of Dramatic Arts in Belgrade, Film and Media Studies. Curator and producer in the field of visual arts and film.

Miroslav Karić, art historian. Since 2001, he has been a curator at the Independent Artistic Association Remont. A collaborator, coordinator, curator, PR and author of essays in over 20 local and international projects in the field of contemporary visual art. Since 2020, a curator at the Museum of Contemporary Art in Belgrade.
Slađana Petrović Varagić and Miroslav Karić were the art co-directors of the Artget Gallery for 2017.
www.film-art.org/fotodokumenti

***
The exhibited photographs from the automatic photography machine were taken in 1974 and 1976 in multiple ad hoc photo sessions by a group of friends: Ljubica Seka Stanivuk, Zorica Lojpur, Gojko Škarić, Rusomir Bogdanovski, Tomislav Gotovac and Dragica Vukadinović. The “material” remained the property of the then “producer”, i.e., the person who provided the coins at that moment.
The exhibited photographs in the Polaroid technique were mostly created as a photo-dialogue between Gojko Škarić and Dragica Vukadinović, and some friends would appear occasionally as guests: Ljubica Seka Stanivuk and Goranka Matić, Verica and Mladen Kozomara, Ljiljana Stojčić and others. 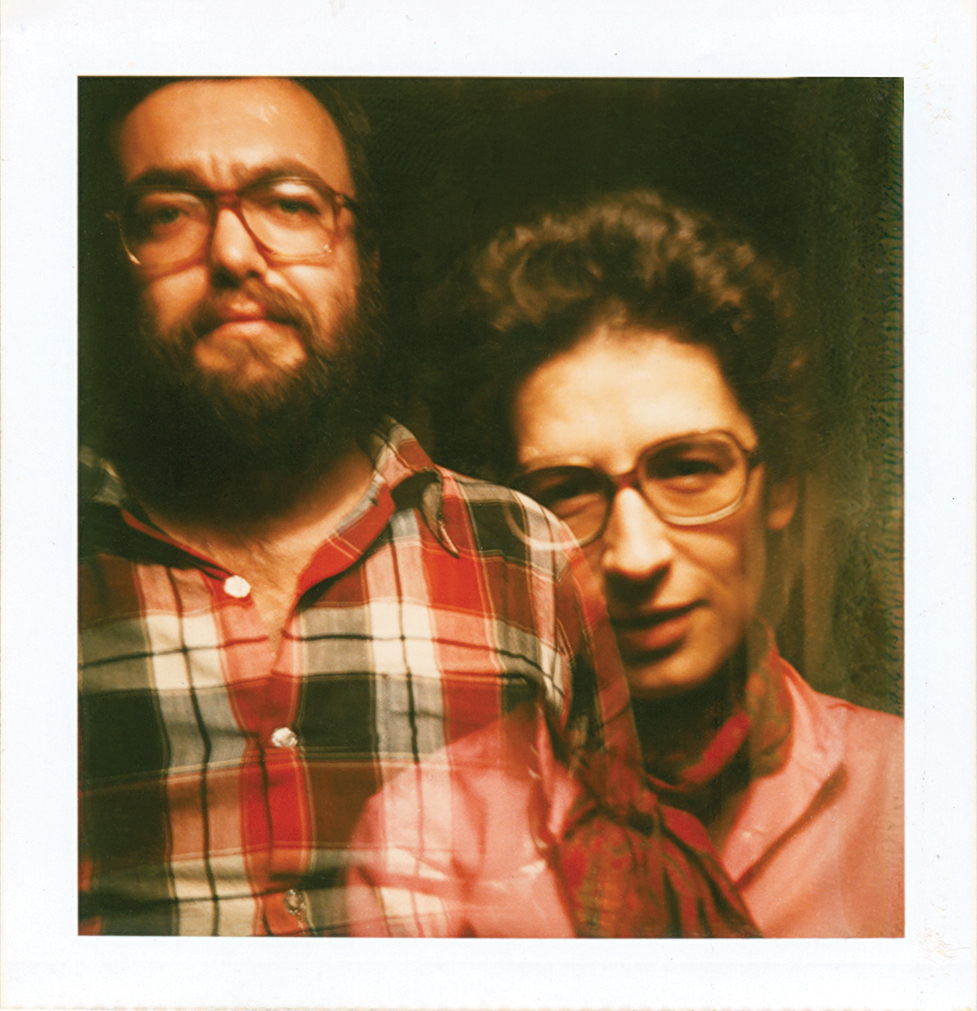 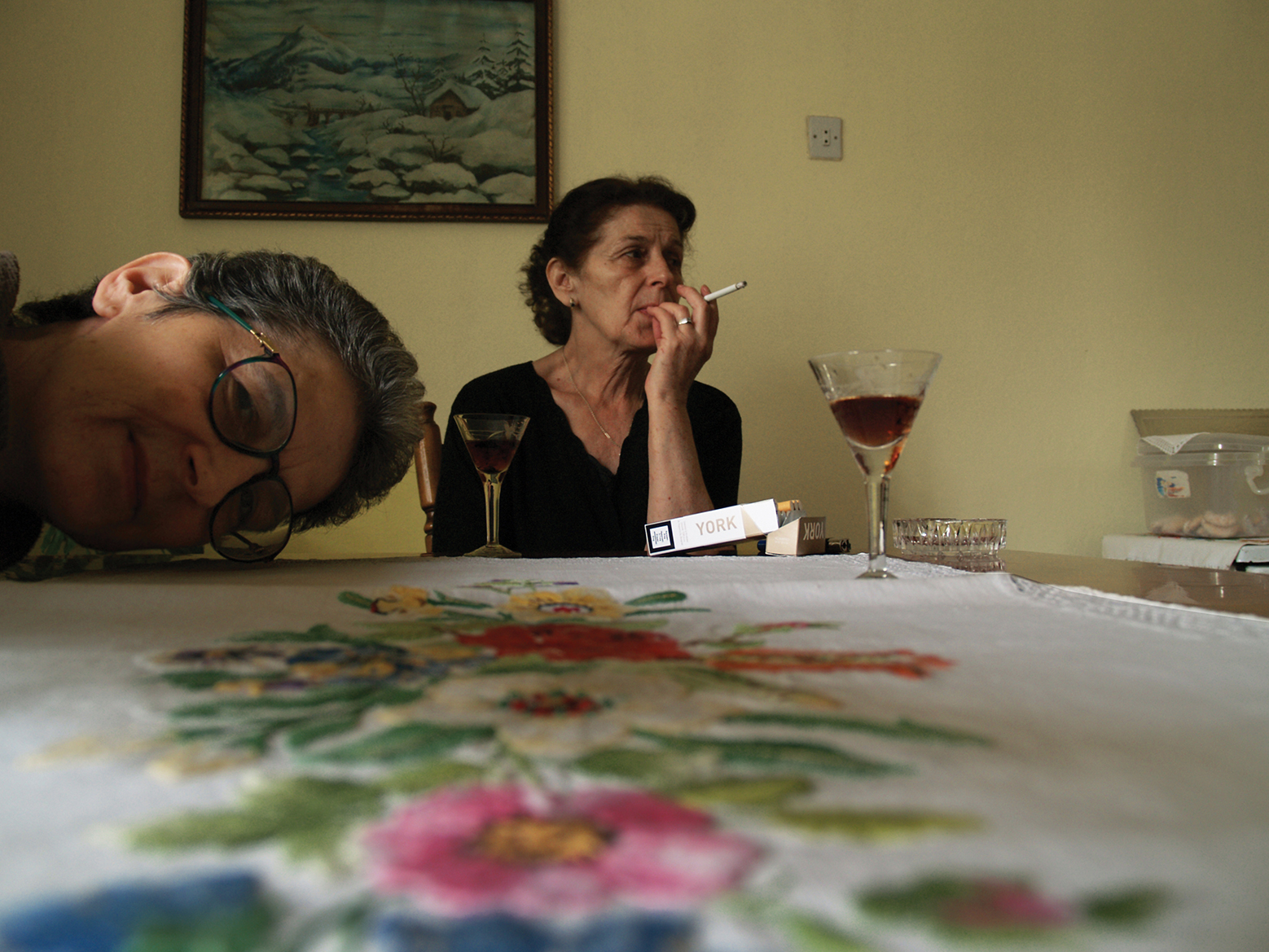 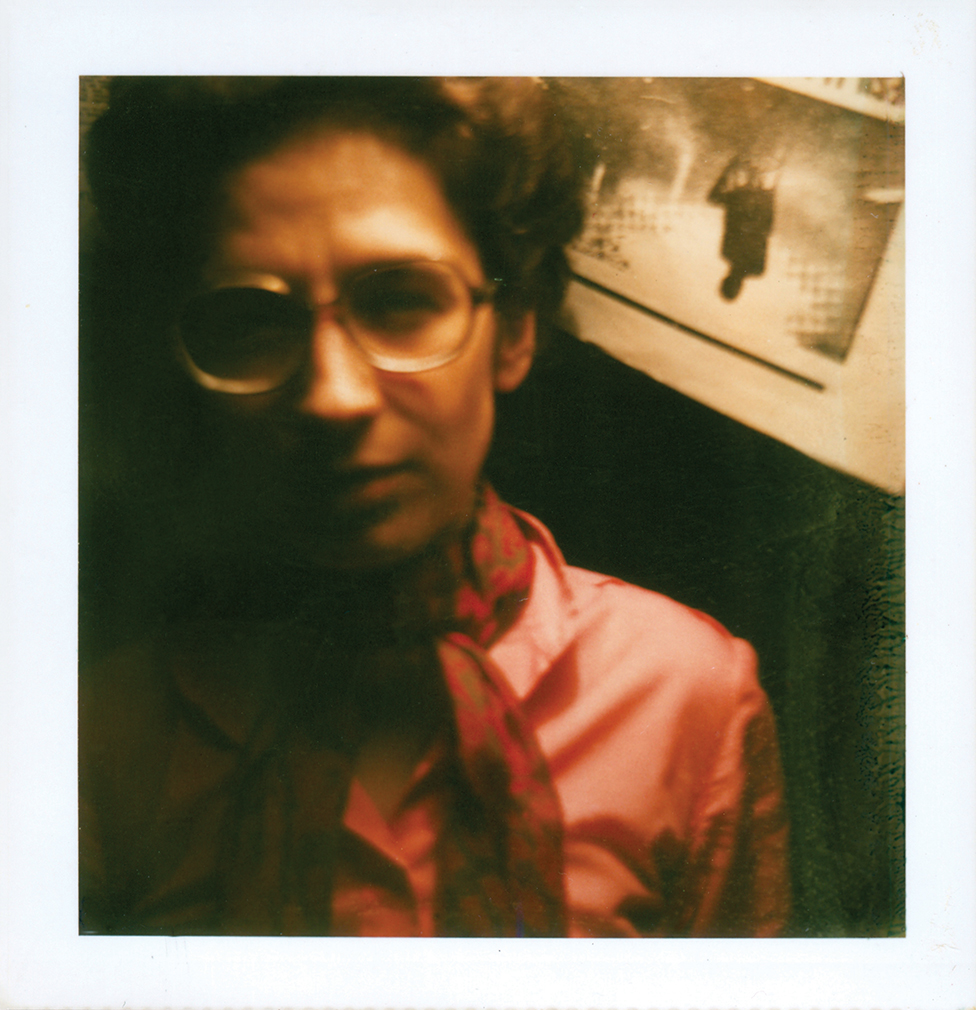