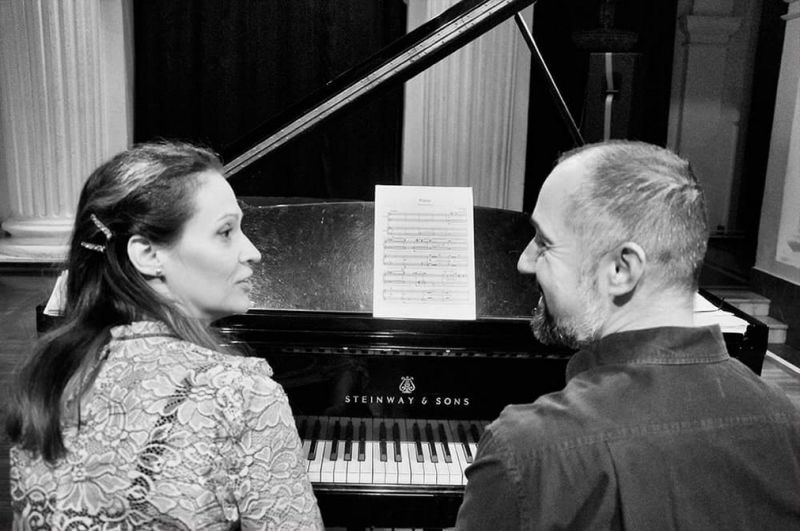 Tea Dimitrijević and Dejan Subotić have been performing together since 2007. They have played a large number of concerts in major venues in Belgrade and other cities in Serbia, featuring an extensive repertoire comprising works spanning from Classicism to the 21st century.

Mélanie Bonis
The Dream of Cleopatra

Biographies:
Tea Dimitrijević and Dejan Subotić have been performing together since 2007. They have played a large number of concerts in major venues in Belgrade and other cities in Serbia, featuring an extensive repertoire comprising works spanning from Classicism to the 21st century. They performed at a gala concert celebrating Robert Schumann’s bicentenary at the City Hall of Belgrade, held as part of the festival Šuman i njegovi dvojnici (Schumann and his Doubles), as well as the 45th Mokranjčevi dani (Mokranjac Days) festival in Negotin. A recording of their interpretation of work by Schumann has been broadcast by BBC3. The Duo have performed all of Erik Satie’s work for piano four-hands, while in April 2012, to mark 150 years since the birth of Claude Debussy, they gave a concert featuring all of his works for piano four-hands. They have also given several recitals featuring special topics, such as Music for Children, Women Composers, French 19th- and 20th-century Music, Chamber Music of Valery Gavrilin, as wall as large number of concerts featuring contemporary Serbian music. They have premiered several works for piano four-hands by Serbian authors that were specially composed for them (Svetlana Savić, Branka Popović, Dragana Jovanović, Tatjana Milošević, as well as the entire oeuvre of Miloš Petrović for piano duo. Dimitrijević and Subotić were the first two Serbian artist to receive doctoral degrees in the field of chamber music. The Duo have also won a Silver Medal of the University of Arts in Belgrade.

Tea Dimitrijević was born in Belgrade. She finished both graduate and postgraduate studies at the Faculty of Music in Belgrade with professor Mirjana Šuica- Babić. She specialized in chamber music and finished graduation studies of harpsichord with Professor Miloš Petrović. She got her PhD degree in the field of chamber music with professors Miloš Petrović and Zorica Ćetković.
She took part in a lot of concerts throughout Serbia, Montenegro, Germany, Slovenia, Greece, Macedonia and Austria, both as a soloist and as a part of chamber ensembles. She performed with Belgrade Philharmonic orchestra, Arte ensemble, St. George’s strings, New music ensemble, Camerata Serbica orchestra and Nordic Balkan String orchestra (NORBAL). She participated in the festivals BEMUS and BELEF in Belgrade, NOMUS in Novi Sad, Budva grad teatar, Mokranjčevi dani, AFES in Macedonia and Ohridsko leto. She also regularly performs at the International Review of Composers. As a permanent collaborator with Symphonic orchestra of RTS, she participated in the performances of a lot of pieces of Serbian and international composers, performing with well-known conductors, soloists and opera stars: Montserrat Caballé, Kiri Te Kanawa, José Carreras, Placido Domingo. She took part in a lot of premiere performances of the pieces written by the Serbian composers, especially for the piano duo.
She teaches at the Faculty of Music in Belgrade as a professor at the Chamber Music Department. She is an author and a host of the radio show Susretanja (Encounters), as well as of the night programme Iza violinskog ključa (Behind the treble clef) on the first programme of Radio Belgrade.

Dejan Subotić completed graduate and postgraduate studies in piano (professors Andrea Inhof, Andreja Preger and Nevena Popović) and received doctoral degree in chamber music from the Faculty of music in Belgrade (professor Zorica Cetković). He also holds bachelor and master degrees in harpsichord.
He attended chamber music classes of prof. Mats Zetterqvist in Stockholm (Royal College of Music, Edsberg School) and was an active participant of numerous master classes (Peter Lönnerberg, Konstantin Bogino, Borbola Doboszy, Peter Dircksen, Syavush Gadzhiev, Boris Previsic). Dejan Subotić is the prize winner of several competitions, most notably the Piano competition in Rome and Kawai competition in Italy. He took part in many festivals, like Mokranjcevi dani, The International Composers’ Tribune, OKTOH, Convivium musicum, Ars vivendi clavicembalum, The Harp Festival and others. He is a member of Singidunum trio with flutist Stana Krstajić and violinist Ksenija Milošević. The trio has performed numerous new pieces, mostly written by Serbian composers. Dejan Subotić is also a member of piano duo with Tea Dimitrijević. This piano duo performs regularly, playing among others complete works by Claude Debussy and Erik Satie. Their live recording of piano duo pieces by Schumann has been broadcast by Radio BBC3. Dejan Subotić performed as a soloist with orchestra in pieces by Bach, Martin and de Falla. He gave concerts in Austria, Romania, Slovakia, Croatia and Czech Republic.
He teaches at the Faculty of Music in Belgrade as a professor at the Chamber Music Department.