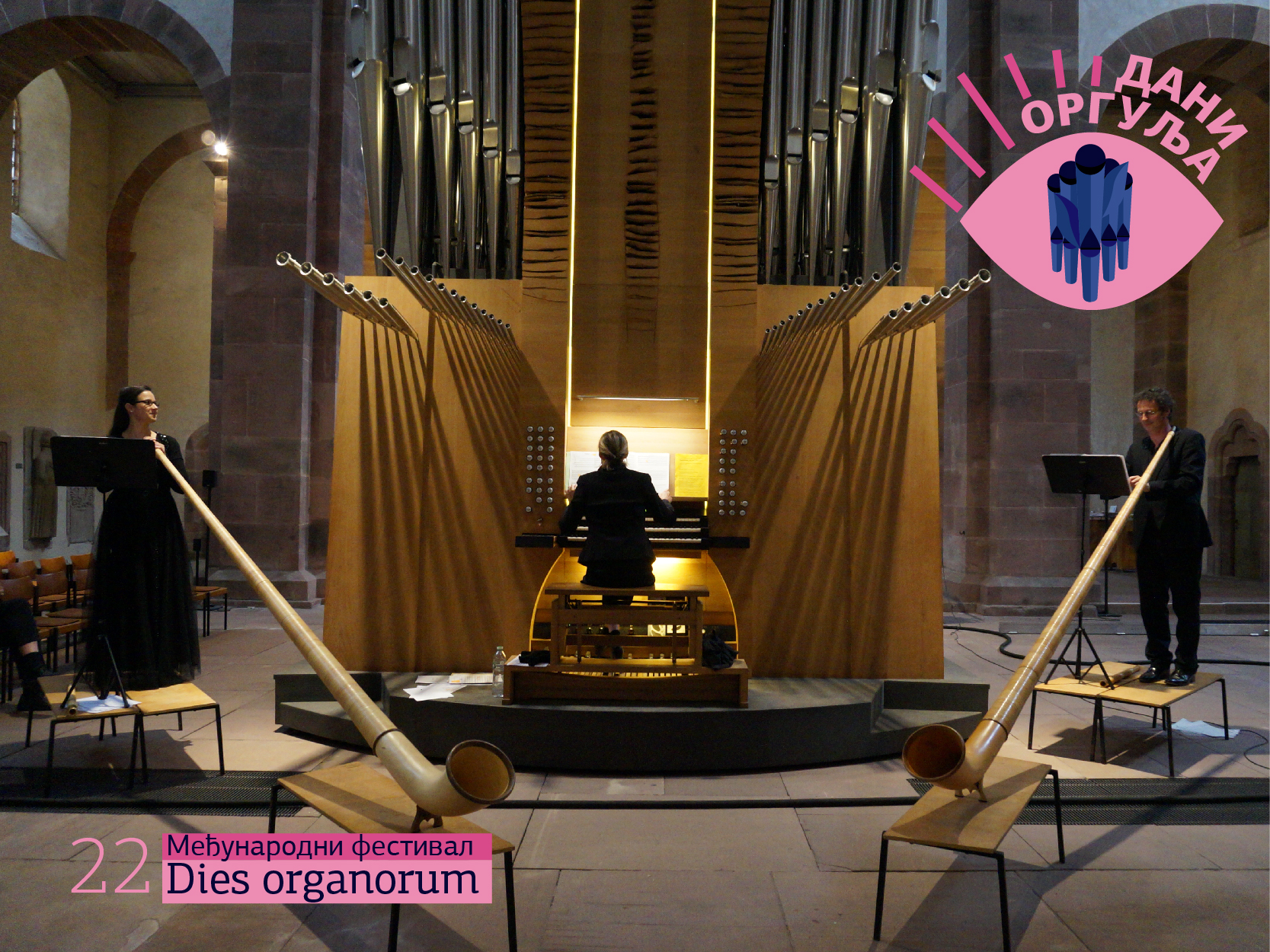 The concert Brilliance of Sound for Two Alphorns and Organ will be an opportunity for our audience to get to know another unusual instrument. The musicians who will lead us through this new, luxurious sound world are horn players Ana Stanković (Serbia / Germany), Eckhart Fischer (Germany) and organist Carmen Jauch (Germany). The way in which they use the acoustic specifics of each individual concert space is especially interesting, changing the position from which they play during the concert. The visit of the trio was supported by the Goethe-Institut in Belgrade and the Embassy of Switzerland in Serbia.

Alphornist Eckhart Fischer have joined this trio after the accident that happened to Martin Roos, original member of the ensemble. Roos broke a leg and he had to cancel all his activities in next 6 weeks. Carmen Jauch (Rottweil) completed her studies in Church Music (A), Concert organ and Harpsichord in the class of Martha Schuster, Harald Feller and Christine Schornsheim at the University of Music and Performing Arts Munich. She finished  further organ studies through the DAAD Fellowship with Hans-Ola Ericsson in Piteå in Sweden and harpsichord studies with Michael Eberth at the Mozarteum University in Salzburg. She has attended workshops with Marie-Claire Alain, Olivier Latry and Trevor Pinnock. From 2007 to 2009 she was the organizer and artistic director of International Summer Concerts at the German Church of St. Grtrud in Stockholm. Her concert activities have taken her to Norway, Sweden, Austria, France and Argentina. As a harpsichordist, he performs regularly as a soloist or as a continuo player at church concerts and at various art festivals. Since 2015, she has been a cantor at the famous Alpirsbacher Klosterkirche, which is famous for its 900-year-old complex which houses the 2008 Winterhalter-Orgelskulptur organ. As a cantor, Carmen Jauch is also the artistic director and organizer of famous concerts in this monastery. She lives and works in Munich and Alpirsbach and also work as an organ, harpsichord and piano teacher. More info Martin Roos collaborates with the Südwestdeutsche Philharmonie Konstanz the National Symphony Orchestra in Johannesburg, the Chinese National Symphony Orchestra, the Symphony Orchestra in Bern, Baroccisti Lugano and the Concerto Köln. He performed several world premieres, such as “Alphornklänge” by Jost Meiers at the Art Festival in St. Moritz and at the Alpentöne festival in Altdorf, “Sogno nel casotto” by Hans-Jürg Meier, “Sequenza A” by Georg Heike and “5 imaginäre Kühreihen” by Fabian Müller. Roos is a founder and member of the trio dedicated to the promotion of experimental music “Stück für Stück – Alphorn Eigenart” with Juliana Baucka and Anita Kuster. Also, he is a founder and former member of the quartet “Hornroh”. With various programs for alphorn and organ, alphorn and accordion, he performed concerts in Switzerland, Italy and Germany. Roos made numerous radio, television and CD recordings. He collaborated as a guest with Hans Kennels “Mytha” at the festival in Lucerne, EXPO in Hanover and WDR big band of the Philharmonic in Cologne. Martin Roos is especially dedicated to the further development of the alphorn in the field of classical music. He studied horn in his native Lucerne, and later in Dresden and Basel. As a chamber musician and natural hornist he played throughout Europe. He was a longtime solo horn player of the Sinfonieorchester Basel. He lives in Basel. More info

Ana Stanković is an internationally sought-after instrumentalist of the Alphorn and Horn, a pedagogue and a member of the jury who lives in Germany on the Black Forest, Baden-Württemberg. She studied horn in her hometown of Belgrade / Serbia, and then continued her studies as a DAAD scholarship holder in Trosingen with Prof. Francis Orval. She is a winner of national and international competitions, and was a scholarship holder of the renowned international art school Interlochen / USA. He collaborates with orchestras in Berlin and Bayreuth, Ensemble de Cor in Luxembourg, I soloists di Perugia in Italy, then with the Chamber of Commerce in Tübingen, Constanta and Basel, the European Philharmonic, the Südwestdeutschen Philharmonie Konstanz, the Süddeutsche Elphonbiergirmo. Along with the concert activity, she is active on the international pedagogical and conducting scene of brass players. In the spring of 2020, for the first time ever, Ana Stanković presented the hitherto unknown alphorn in Northern Ireland in Belfast at Queens University, where she was a visiting assistant professor. This versatile artist has an extensive repertoire of different styles of traditional and modern genre for the alphorn. It represents the alpine horn in various genres through unexpectedly soft and delicate, but at the same time incredibly powerful and strong sound and is dedicated to the development of new functionality of the alphorn. He likes to play and experiment with acoustics in a given space. More info