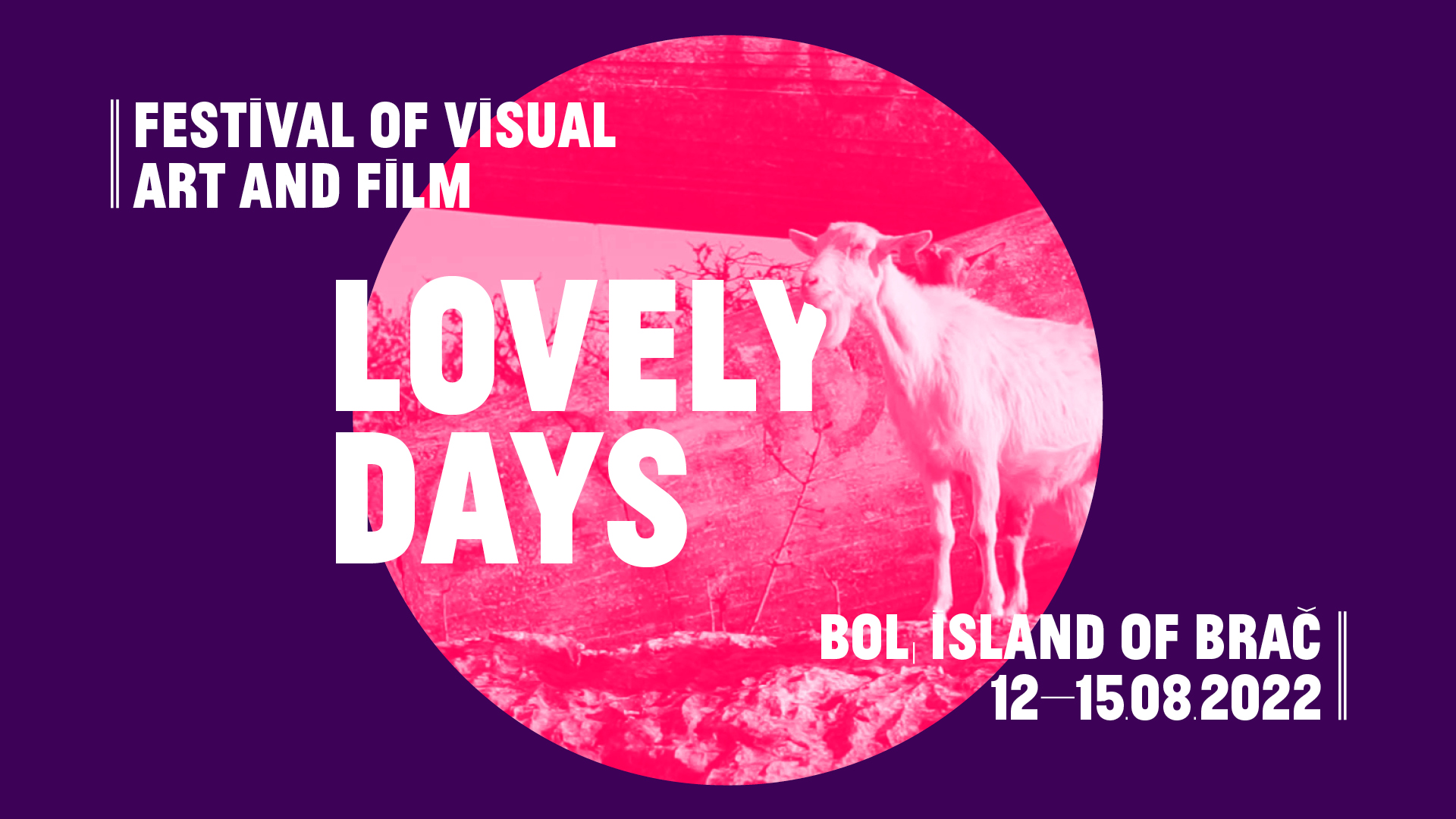 The Visual Arts and Film Festival Lovely Days is happening this year on Bol at Brač island for the eleventh time in a row, from 12 to 15 August, after the idea of the visual artists Renata Poljak, who is also the acting directress and the founder of the festival. This summer event on Bol has been bringing important names of the local and international art scene for years, along with the display of the artworks. This year there will be talks and hanging-around with artists in an exceptional surroundings of Bol island on which the synergy of the space brings a special element to this event.

A solo-show by Igor Grubić will open the festival and during the programme works by Neli Ružić will be shown, who is set to have an exhibition at the Cultural Centre of Belgrade’s Podroom Gallery during 2023.

(excerpt from the festival announcement)

Out of two festival programme blocks one has been dedicated to the insight into the opus of an artist and the other is a selection of works from the October Salon Collection – both selections have been conceived by the curator Zorana Đaković Minniti, who works as a programme directress at Cultural Centre of Belgrade, where she has been executing the coordination of the international cooperation and has been the head of Gallery Podroom programme which has moving images and multimedia installations focus.

The first block is dedicated to the artist Katarina Zdjelar, whose work is marked by theoretical and practical research of sound, especially voice, the analysis of political and social dimensions of the musical world, reflections of different identities in different contexts.

In the other block, there will be three works by different generations – Želimir Žilnik, Oliver Ressler and Škart group, whose works actualize the questions of social relations towards the processes of transformation and transition of post-socialist states.

Most of the works are part of the October Salon Collection, which exists since 2012 and which is in the care of Cultural Centre of Belgrade. Many thanks to Katarina Zdjelar and Škart group who gave their works for this occasion, which are not part of the aforementioned Collection.

All programmes are freely accessible and begin at 10 p.m.
https://lovelydaysbol.com/2022/index.html

▶ Schoum, 7′, 2009
This video work documents the attempt of people who do not understand English to decode the lyrics of the 1980’s mega-hit Shout by the British band Tears for Fears. Two men transcribe phonetically what they hear, based on their own vocabulary and the capacity to vocally interpret the unfamiliar, creating something of their own, something between the unfamiliar and familiar.

▶ My Lifetime (Malaika), 5’37”, 2012
The work shows the National Symphony Orchestra of Ghana, recorded during 2011/2012 at the National Theatre in Accra. The musicians play Malaika, originally a cheerful and empowering post-colonial composition, performed by Miriam Makeba, Harry Belafonte, Boney M and others. The orchestra was founded by President Kwame Nkrumah in the late 1950s, when Ghana became the first country on the African continent to break free from colonial rule. In the intermittent sounds of music and images of overtired musicians, there are only glimpses of the events and changes that could have happened in the meantime, and the stage where they perform seems to become an indefinite waiting room for a postponed or suspended future. ▶ AAA (Mein Hertz). 4’30”, 2016
The work was recorded in a single frame and shows a young woman performing four compositions simultaneously. While preserving the original style, tempo and rhythm of individual songs, she remains in the key of different pieces of music. Silence, music, sound and words alternate and collide. The protagonist’s face and vocal chords serve as a battlefield for quick transitions between different tracks. Her singing is about the way of overcoming the gap between the tracks and about the historical, stylistic and linguistic accuracy of different compositions.

Katarina Zdjelar grew up in Belgrade and is currently based in Rotterdam. She works mainly in the medium of moving image and installation and her core theoretical and practical artistic interests are voice, music, sound and language. Her recent works deal with the potentials and legacies of pacifist (proto) feminist practices, including that of Käthe Kollwitz and Dore Hoyer. Zdjelar graduated from the University of Arts in Belgrade, received her Master of Fine Arts degree from the Piet Zwart Institute in Rotterdam and completed a two-year residency programme at the Rijksakademie van beeldende kunsten in Amsterdam. She represented Serbia at the 53rd Venice Biennale and her works have been presented in numerous solo and group exhibitions in the country and abroad. She has won some prestigious prizes, most recently the MMSU Award of the 24thZagreb Salon in 2019 and Dolf Henkes Prize in 2017. Katarina Zdjelar is also an educator and tutor at Piet Zwart Institute (MA Fine Art), WdKA Rotterdam and Master Artistic Research Studies at the Royal Academy of Arts in The Hague.

▶ Igor Grubić, Individual Collectivism, TV portrait of Katarina Zdjelar, 5’51”, 2009
Production of the 50th October Salon, 2009
The basic idea was to bring contemporary art closer to the audience. In the form of TV portraits in which artists talk about their work in a simple way, Igor Grubić tried to point out that their work is very much alive and close to everyday problems and topics that each of us encounters and deals with. The title – Individual Collectivism – refers to an individual who relies on another, who thinks about their community, society. ▶ Želimir Žilnik, The Bankruptcy Estate Dossier, digitized version of the TV series, 1 episode, 27’14”, 2008
The Playground produkcija Production Company complements the story of the failed privatization of two Zrenjanin companies with its documentary series, through the examples of INOVOZ and BEKO. Combining documentary footage of the workers’ protest, video archives and statements by experts from various social fields – such as economics (economists and economic media analysts), labour rights (trade union representatives, legal experts, labour psychologists) and representatives of state bodies and institutions responsible for the privatization process, the struggle against crime and corruption, starting a social dialogue – Žilnik is trying to find an answer to the question why hardly anyone talks about the position and rights of workers.

Želimir Žilnik (1942, Niš, Yugoslavia) is a filmmaker from Novi Sad, Serbia. He is the author of over 50 feature and short films, which have been presented at international festivals in Berlin, Toronto, Rotterdam, Moscow and Oberhausen. From the late 1960s, socially engaged films brought him highest plaudits in the former Yugoslavia, but also censorship bans during the seventies and nineties, due to his unequivocal criticism of the state apparatus. The thread running through his entire oeuvre is the power of observation and of creating powerful and influential narratives based on the lives of ordinary people.
Recently, Žilnik had major career retrospectives at the Kunsthale Gallery in Vienna (2020/21), the Centre Pompidou in Paris (2019), the Cinematheque in Argentina (2018), at the international film festival in Mar del Plata (2017), at the Anthology Film Archives in New York and Harvard Film Archive (2017), etc. ▶ Škart, Akcija NAZAD [The REWIND Action], 5’22”, 2006-2008
The Rewind Action was performed for the first time by the Horkeškart Choir on June 9, 2006. The goal of the action is to sing the song “Rewind” in front of the institutions most responsible for the rise of nationalism, collapse of the SFRY and civil wars of the 90s in Yugoslavia.
Those institutions are (in order of appearance in the film): The Rectorate of the University of Belgrade, SANU (Serbian Academy of Sciences and Arts), SPC (Patriarchy of the Serbian Orthodox Church), the Supreme Court and the Government of the Republic of Serbia.
The second Rewind Action was performed by the Proba Choir, at the invitation of Women in Black, as part of the action of the Coalition for a Secular State, on December 10, 2007, on Trg Republike (Republic Square) in Belgrade, within the celebration of Human Rights Day.

The group Škart (rejects/ausschus/scarto) was formed in 1990 at the Graphic Studio of the Faculty of Architecture in Belgrade. Trying to find new values through mistakes, this collective, together with numerous collaborators, use poetry, drawing, graphic design, publishing, performance art, alternative education and social activism. In this video Ressler focuses on the political and economic situation in the Republic of Armenia, one of the successor states of the Soviet Union. The film was shot in the summer of 2010, at the largest bazaar in Yerevan, called “Bangladesh”. Every day, more than a thousand people try to survive by working as salesmen at the Bangladesh Bazaar, where they do not earn more than 100 to 250 euro a month. In the video, they talk about how they survived the crisis in the post-socialist state, which closed most Soviet-era factories and destroyed social safety nets.

Oliver Ressler (Knittelfeld, Austria) is an artist and director. His installations, interventions in the public space, and films raise issues related to economics, democracy, global warming, forms of resistance and an alternative way of life. He has participated in over 350 group exhibitions around the world and his thirty films have been screened at numerous events, at art institutions and festivals. Based in Vienna