Tereza Zelenkova • Maladies of the Infinite 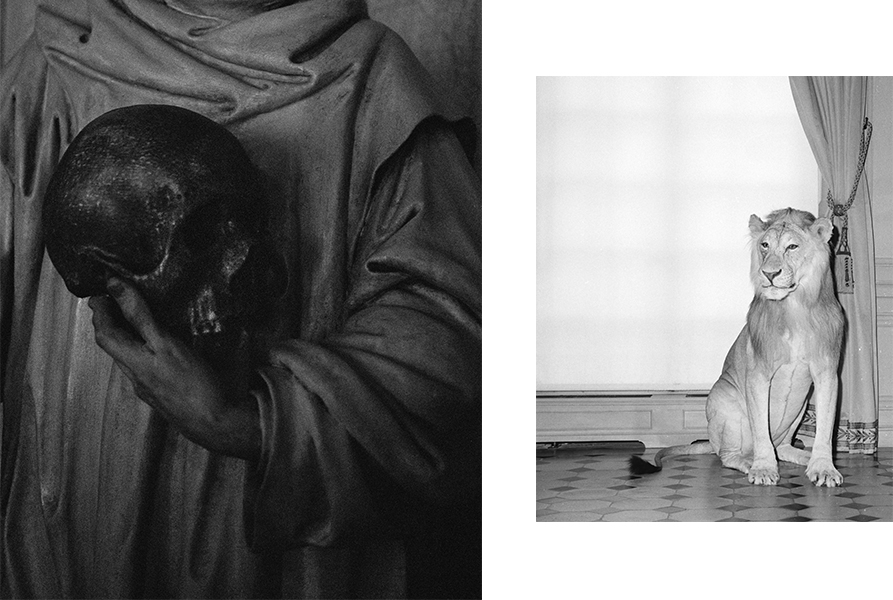 Maladies of the Infinite

Yet by “furnishing”, we mean something additional to the customary mobilia- bed, shelf, curtain and so on. We mean also the way a room or a person compose an image of time, through a process of mutual accretion, exchange, application, erasure, renovation and decay. By “furnishing”, we also mean surfaces as they index and influence our wandering transit. Furniture, or composed surface, is transitive. It is structure for touch or approach. Its economy shows reception become form. It figures time as the bending and extension of our bodies. This is a room. It archives touch. Like an archive, its passivity seduces and structures us. It asks us to enter its own language.

The solo exhibition of Czech artist Tereza Zelenkova brings together photographs, objects and texts from her ongoing practice that is based on photographic inquiries informed by the 19th century cultural landscape, local mythologies, classical literature, psychoanalysis and philosophy. Working in analog black and white technique, her photographs draw the viewer into the world of the occult and mystical, translating speculative historical narratives and sensibilities of the passed epochs into tangible representations. The exhibition “Maladies of the Infinite” is conceived as a comprehensive installation made up of fragments through which the notion of the interior is considered, both in the historical context of dwelling in the 19th century, and in particular symbolically charged spaces such as apartments of prominent authors, curiosity cabinets and museum rooms, as well as in terms of the ambivalent experience of one’s own home in contemporary post-pandemic times.

Walter Benjamin’s observation that the nineteenth century like no other before was obsessed with dwelling, referring to a space that “like an alluring creature disguises itself, putting on the costumes of moods” best describes the melancholy of stuffy rooms from the time of the “Paris spleen”, crowded room-museums that tend to archive their own tenants. One such tenant is T. from the story written by the artist, which is an integral part of the exhibition. Like JK Huysmans’ Des Esseintes from the novel “A Rebours”, this eccentric character withdraws into a radical form of isolation that can be read as an attempt at a kind of “experimental sensualism”, isolated and surrounded by refined objects, plants and textures, which slowly take over him. He no longer inhabits the room, but the room imperceptibly moves into him. We may ask a question at this point, aren’t our homes always at once universes of our individuality but also prisons that frame and expose our mortality?

Home in this case becomes a solitary stage for the reclusive character to perform his bizarre habits and idiosyncrasies, to engage with his own transience of which he is somewhat paradoxically reminded by his mute possessions.

The idea of an interior as an expression of an individual’s macrocosm has a historical rootedness; it comes with an invention of personal taste and boredom, and as such it is related to class power and cultural capital, especially in the 19th century. The maladies of the bourgeoisie, as Freud famously identified them, were a result of repressions of fundamental and primordial desires, which, regulated by social norms— especially in the era of an intense moral preoccupation, would return as unconscious manifestations through involuntary actions. In other words, that which is suppressed would come back to haunt us often in unexpected forms and guises. This was the case with a married couple from the newspaper article that Freud mentions in his essay “The Uncanny”, who upon moving into a new house furnished with stylish furniture, start experiencing disturbing sensations. The curiously shaped wooden table with carvings of crocodiles somehow comes to life at night as the tenants begin to experience a series of symptoms- swampy odour, gliding sounds, tripping over enigmatic objects in the darkness and so on. For the remarkable terror of the uncanny arises precisely from something foreign and threatening that is yet always “too familiar”, always “within”. The apartment of the fin de siècle encapsulates this encounter of the near and remote, familiar and estranged, like reflections in the newly manufactured mirrors. In it, furnishing becomes cohabiting. As the world outside accelerates through steam and electricity, the apartment lies unaffected, conjuring up the image of stillness and dust.

Fragments of the uncanny interiors from Zelenkova’s photographs become symptomatic spots through which the “maladies” of time can be registered—fetishes, desires, reveries and dreams dreamed in the noise of the industrial revolution and early capitalism, which only the room, that private universe of the individual, with its heavy brocade curtains and upholstered furniture can still muffle. Tereza Zelenková (*1985 in Czech Republic) is an artist based between Prague and London. She is best known for her black and white photographs influenced by literature and mysticism. Central to her practice is the combination of photography with her own writing; a fertile relationship that draws together her influences of the lyrical alongside a commitment to research, resulting in often wide-ranging and complex lines of enquiry.

Tereza Zelenková received her MA in Photography at the Royal College of Art in London in 2012. She has received several awards and her work has been exhibited on four different continents. Recent exhibitions include Known and Strange at Victoria & Albert Museum in London (2021 – 2022). The Double Room at Campbell House Museum in Toronto (2021), Dead Language at Josef Sudek Atelier in Prague (2020), The Essential Solitude at The Ravestijn Gallery in Amsterdam
(2018), A Snake that Disappeared Through a Hole in the Wall in the wall at Foam Museum in Amsterdam (2018), and A Handful of Dust at Whitechapel Gallery in London (2017). Her photographs are held in the collections of Victoria & Albert Museum, Foam Photography Museum, Musée de l’Élysé, Saatchi Gallery and Fotomuseum Winterthur.
She has two published books, Supreme Vice (Mörel books, 2011) and The Essential Solitude (VOID, 2021), as well as several self-published books.