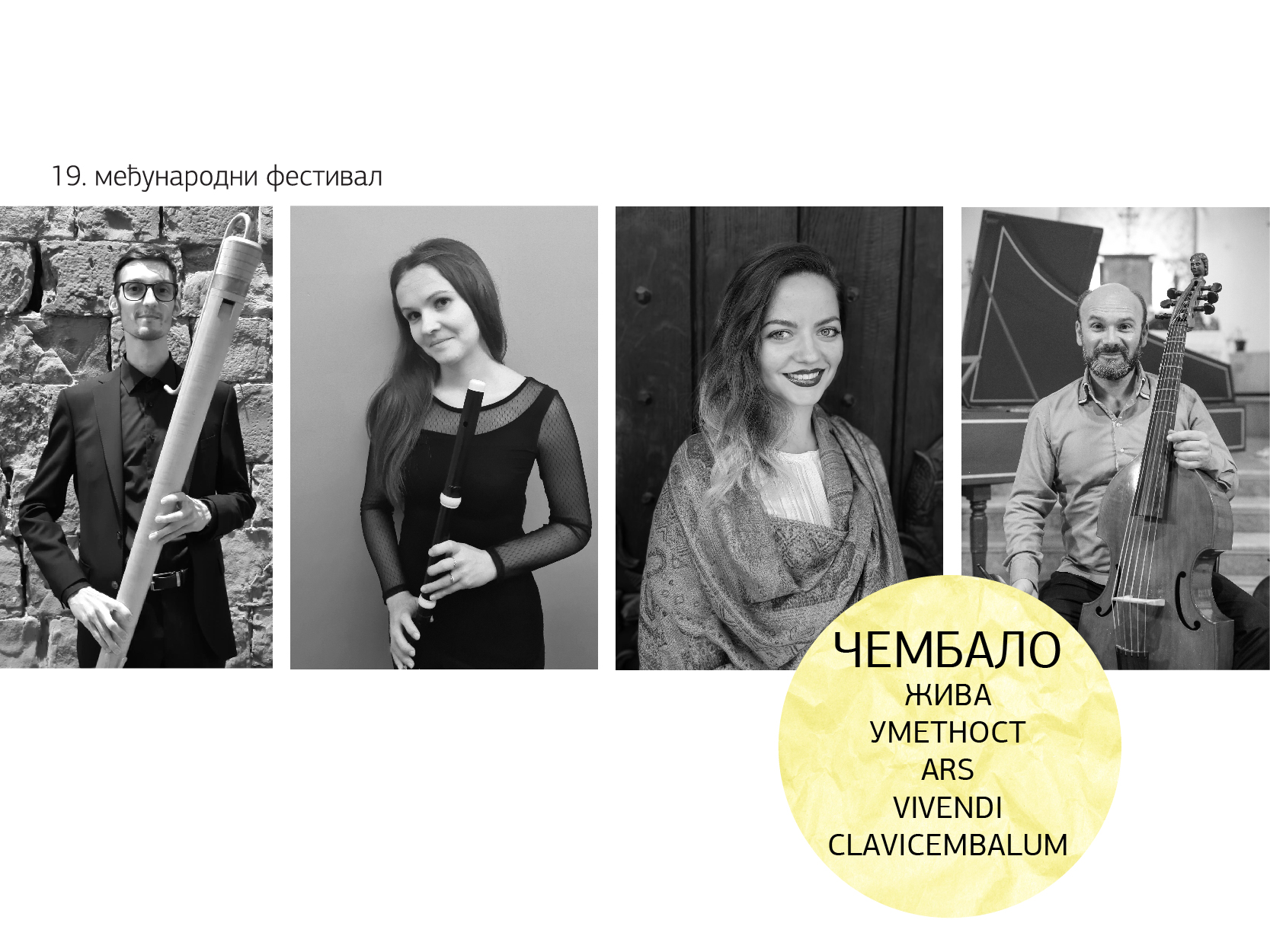 Biographies:
Emilija Miodrag graduated from the harpsichord program at the Academy of Music in Ljubljana, and she has since taught harpsichord. There she was in the class of professor Egon Mihajlović, with whom she is currently working on a Master’s degree. She perfected herself professionally during harpsichord master workshops with eminent professors of early music, including harpsichordists Florian Birsak, Ottavio Tenerani, Frederick Haas, Maria del Mar Blanco Moreno and others as part of the master workshops of the harpsichord festival. She received a stipend from the Belgrade Baroque Academy, organized by the artist Predrag Gosta, and she also received a stipend from the Summer Baroque Academy in Innsbruck. She was a participant in the Summer Baroque Academy in Polau under the guidance of Konstanze Rieckh. And, she participated in the atelier of Jory Vinikour and the festival in Grisignana, which was led by Egon Mihajlović. She likewise performed as part of concerts representing cycles of Byzantine cultural glare within Western European renaissance and baroque musics, including French and Spanish themes. She performed in these concerts at the National Museum of Belgrade under the artistic lead of Svetlana Stojanović Kutlača. Ms. Emilija Miodrag obtained a Bachelor’s degree and a Master’s degree in Piano at the Academy of Art in Novi Sad while in the class of professor Iris Kobal and in cooperation with docent Milan Miladinović. During her studies, she had the opportunity to learn the organ as a parallel program under the guidance of professor Zoltan Borbely. She has performed as a soloist and a chamber musician in Belgrade and Novi Sad. She is also dedicated to music education, presently teaching piano in the elementary school Vladimir Đorđević in Belgrade.

Tanja Jarc graduated from the Ljubljana Music and Ballet Conservatory. She studied in the class of Fedja Rupel at the Ljubljana Academy of Music, where she received her bachelor’s and master’s degrees in Musical Art. As a soloist and member of various chamber groups, choirs and orchestras, she performed in Slovenia and abroad and participated in domestic and international competitions. She attended many summer schools and masterclasses for flute, baroque flute and chamber music with renowned musicians: Lucia Rizzello, Alenka Zupan, Karolina Šantl Zupan, Michael Martin Kofler, Matej Zupan; Eyal Ein-Habar, Marcello Gatti, Nicole Molumby, Håkon Austbø, Trio di Parma, Michel Debost, Renata Penezić. She regularly improves at workshops and festivals, such as FlavtIstra, Slovenian Flute Festival, as well as at the 1st and 2nd International Summer School and Festival “Academia Musicae Antiquae Labacensis”. In 2013 and 2014 she performed with trio Barocco at chamber music festival »Allegro giovanissimo« in Ljubljana, held by Marina Horak. In 2015 she toured with traverso quintet playing Boismortier’s Concerto no. 2 in a minor, mentored by Lucia Rizzello. She played with the Baroque Orchestra of the Ljubljana Academy of Music, also as a soloist. In 2022 she attended traverso course at Campus »Musica Antica« in Grožnjan, where within chamber music trio ETU was founded. She is curenttly specializing in traverso and chamber music at Ljubljana Academy of Music.

Urban Klančar studied recorder at Conservatory of Music and Ballet Ljubljana in class of prof. Mateja Bajt. He continued recorder study at Academy of Music in Ljubljana with the same professor. This year, he started Bachelor study for baroque oboe at University of Music and Performing Arts Graz in class of prof. Amy Power in addition to studying recorder for Master degree in Ljubljana. He attended Slovenian national competition TEMSIG as a soloist and in part of chamber group and received multiple prizes. During his studies, he played in different music chamber groups and took part in many official events in Presidental palace, Ministry of Education, Institut Joseph Stefan. He played many independent concerts with renaissance consort in Castle Bogenšperk, monastery Mekinje and in church of St. Paul in Radovljica. In year 2021 he played in different concert cycles such as Solo e da camera and Glasbena mladina Ljubljanska. He was also part of the project Mladi talenti together with students of Academy in Prague. He played in orchestra for Handel´s opera Agrippina. In Belgrade`s National museum he played with baroque group Primavera. This year he established Slovenian baroque trio ETU with harpsichordist Emilija Miodrag and traverso player Tanja Jarc. Its main focus is to introduce baroque music to general public through concerts and classes. They played together in International masterclass in Grisignana and other Slovenian towns. This year they studied as a chamber group in Slovenia under prof. Egon Mihajlović. Urban Klančar actively participates in many masterclasses under well known professors such as Andreas Böhlen, Matthijs Lunenburg, Tabea Schwartz, Lea Sobbe, Stefano Bet, Anne-Susse Enßle, Bettina Simon and others.

Srđan Stanić, cellist and gambist, studied cello at the Belgrade Music Academy. He began to actively explore early music at the Early Music Department of the Josip Slavenski Music School, studying viola da gamba with Miomir Ristić, a long-time member of the Ensemble Renaissance. He currently plays viola da gamba and baroque cello in several ensembles, including Renaissance, Belgrade Baroque, New Trinity Baroque, Anonymous, as well as Flauto Dolce (Joculatores), Parnas, Tempera Barocca, Ludus Musicus and others. He performed a large number of concerts both in Serbia and abroad, playing the music of the Middle Ages, Renaissance and Baroque. He attended master classes in Urbino (Italy) with Paolo Pandolfo and at the Austrian Baroque Academy in Gmunden with Christoph Urbanetz. He also worked with Mark Caudle. Srdjan Stanic collaborated with several prominent artists, such as Antoinette Lohmann, Michael Fields, Laura Antonaz, Maria Luisa Baldassari and Predrag Gosta. He also worked closely with Predrag Preša Novović and Divna Ljubojević. Srdjan is employed in the Symphony Orchestra of the Radio-Television of Serbia as a cellist. He has been a member of the ROCHER Music Institution since 2014. He works as a viola professor in the Department of Early Music at the Josip Slavenski Music School in Belgrade.