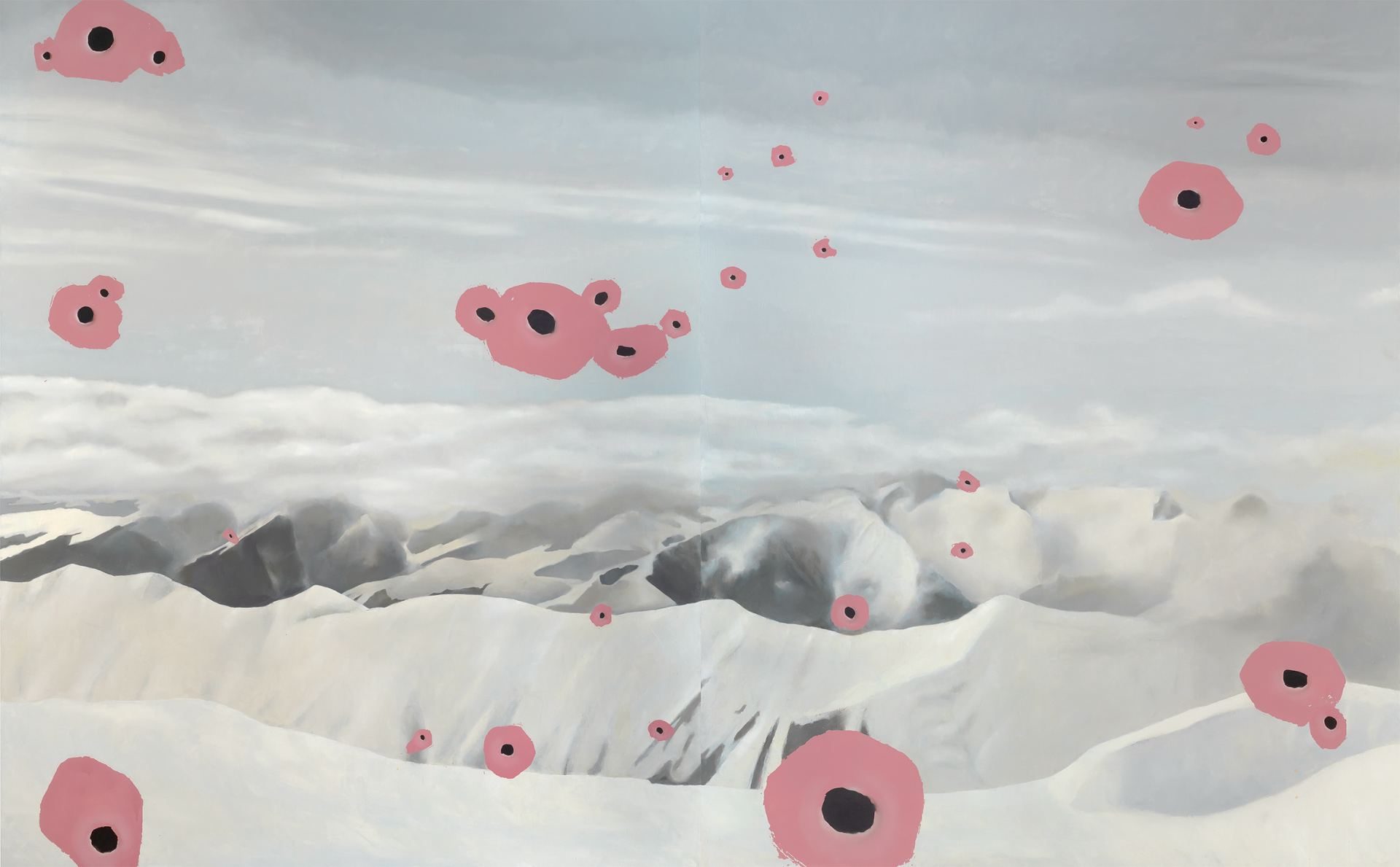 LAND WITHOUT LANDSCAPE, LANDSCAPE WITHOUT PEOPLE

Reflections of nature and ecological disasters are present in literature, film, music and visual arts in the international and local art scenes. Belgrade based painter Jovanka Mladenović inserted her experience of many years of systematic research of biopolitics and ecological controls gained in international seminars and eco workshops into her art projects LandEscape (2019) and Habitat (2020), in which she deals with problems of erosion of nature as habitat, influences of climate changes to scenery, ecological cataclysms and destructive actions in nature.

At her current exhibition of paintings, wall drawings-paintings and paintings-installations: Silent (160x200cm), Scratch Out (variable dimensions), Last Breath (320x200cm) and Habitat (820x220cm) all the works are integrated into an environment that associates of the metaphoric state of a realistic landscape in post-capitalist society. It is interesting to note that all the works are signed as paintings created in the technique of oil and acrylic on canvas, although the author’s art practice is characterised by multimedia expression and play with digital-analogue form. The processuality of the work starts on the screen through research and visual-narrative articulation of dystopian places in the frame of a computer image which is, through a 3D projection transposed into the traditional medium and different forms of exhibiting.

In her visual representations of “the world in problem”, the artist is focused on evoking variants of ecological disasters which leave destroyed and desolate places not so pleasant to live in. In the diptych Silent (2019), she presents an imaginary landscape with a huge black hole made by a firearm in the middle of the cracked Earth’s crust, which irresistibly invokes images from outer space. By powerfully guiding the glance of the observer into the depth of the crater and the impoverished view, it creates a feeling of unpleasantness and fear, and similar feelings of unrest are multiplied with each new exposure to traumatic scenes of bare landscapes in the presented works.

What is recognizable in the author’s opus is a visual concept of shaping the scenes which are built in both the digital and analogue phase through binary relations of full-empty, flat-concave, present-absent, near-far, subdued-disturbed. Such an approach is perhaps most pronounced in the wall drawing-painting Last Breath (2019), where the primary landscape of peaceful sky and subdued, snow-covered mountain range is put to life by a playful projection of droplets of the blooming virus, radiantly pink, flying out of human secretion, which levitate in thick swarms on the surface of the painting and radiate across the empty space of adjacent walls in the form of an application.

In the work Scratch Out (2018/2019) the topic is the global problem of today which relates to states’ policies towards forests as natural resources. Playing with painterly illusionism is shown in patterned layering of painting pieces as models of thinking about composition and shaping the structure of the visual representation, which gets its final expression in the form of painting-installation. Painterly illusionism of the scene is presented through different compositional segments made of multiplied motives of the forest presented in the black-white contrast, with the interventions made by lines striking through the landscape as a sign of the annulment of the document and the addition of a discrete colour register through a digital process, which associates of presence of colours in the previous landscape; in another zone of the painting, composed of a series of rectangles, coloured with the same register of white, ochre, dark, grey and black surfaces, arranged in an improvised scheme of the installation, the uniform shapes with their simple colours and rhythm in the sequence of the composition, refer to the possible memory of the place and evoke memories of life of the devastated space in an unusual visual and symbolic manner.

A complex artistic operation is presented in the polyptych Habitat, which – with its imposing size – covers the entire surface of the wall. The premiere of this painting-installation in several visual sequences anticipates dystopian places of the contemporary world. A sort of visual essay starts with an image of desolate scenery with lightning ripping the sky and a huge black grave surrounded by cracked Earth’s crust on the surface and is continued with a representation of a highway through an impoverished wooded landscape, disappearing in the haze of nowhere land. In the forefront of the scene columns and dividers are placed, dominated by a pink rose block resembling a rectangle. The close-up positioning of the geometric block in the painting’s iconography, coloured with an iconic pink, known as “millennial pink”, since it marked the entire generation growing up on social networks and iPhones, inserts a dose of optimism in the imagination of the painting, which can be understood as a symbolic implication of revitalization of a lost landscape.

In ecologically aware circles, necropolitics is a vital topic in recent years. Politicians, experts, academic communities, non-governmental organizations are all fighting against destructive actions of devastation of nature, which in jargon is referred to as “soft political death”. In our public life, the work of Jovanka Mladenović is part of a not-so-large group of artists who raise their voice, in an engaged manner, to help preserve the attainments of the green planet. Each of her projects is a civic and creative departure from the comfort zone, which opens the possibilities for new knowledge and critical thinking of the world overflown with populism and economic interests. 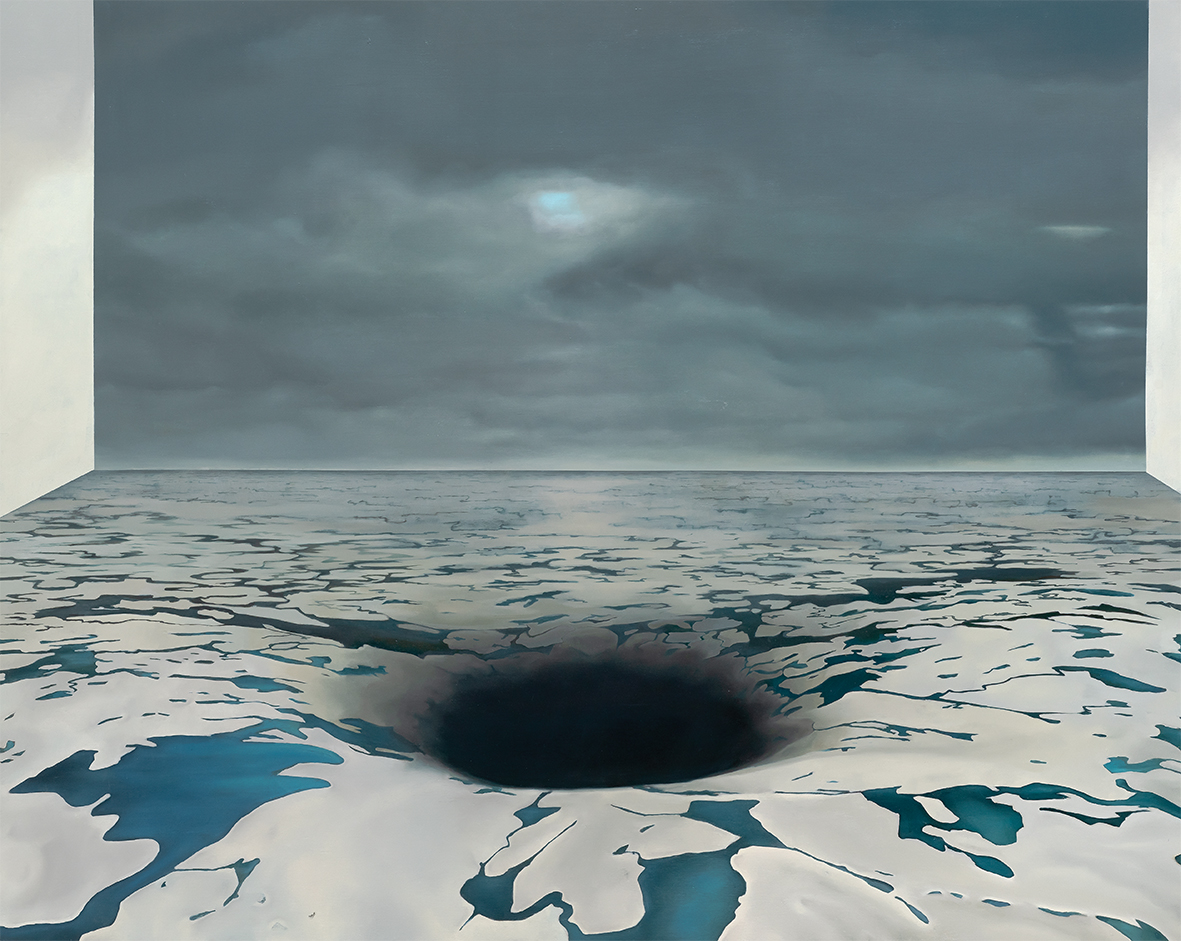 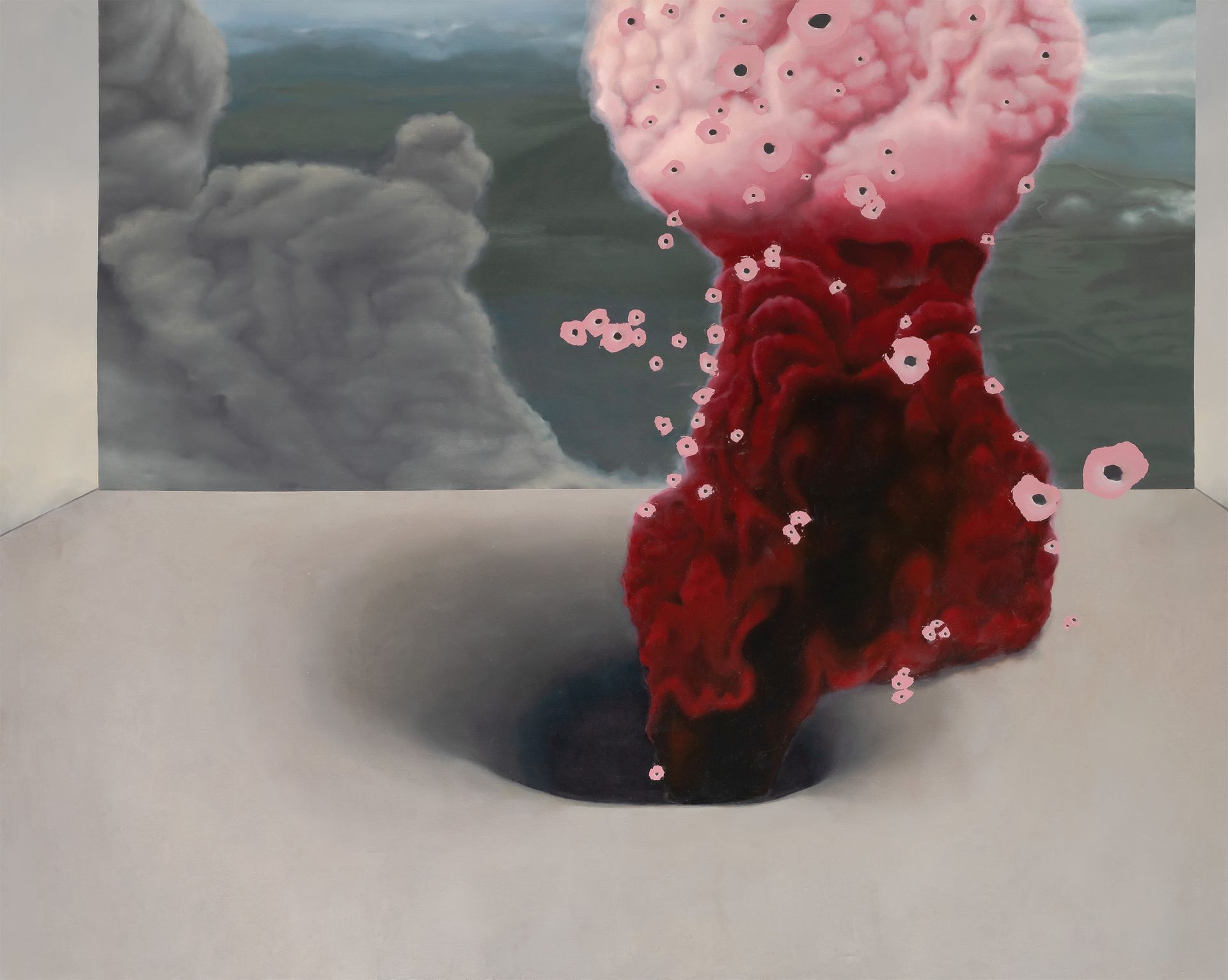 Jovanka Mladenović (Belgrade, 1979) graduated (2003), received a master’s (2010) and PhD (2016) degree from the Faculty of Fine Arts, University of Belgrade. As a French government scholarship holder, she attended a specialist study programme at the Ecole des Beaux-Arts in Paris in 2007/08.
She worked as a lecturer and a coordinator of ecological/artistic workshops at multiple international seminars and art projects, Aurillac/Berlin/Belgrade from 2004 to 2010, as a member of the EKO Plan Organization.
Since 1999 she has presented her work in numerous solo and group exhibitions and participated in residential programmes, seminars and workshops in Belgrade, Los Angeles, Barcelona, Helsinki, Munich etc. She is a recipient of many awards and scholarships and her works are part of a great number of private and public collections in the country and abroad.