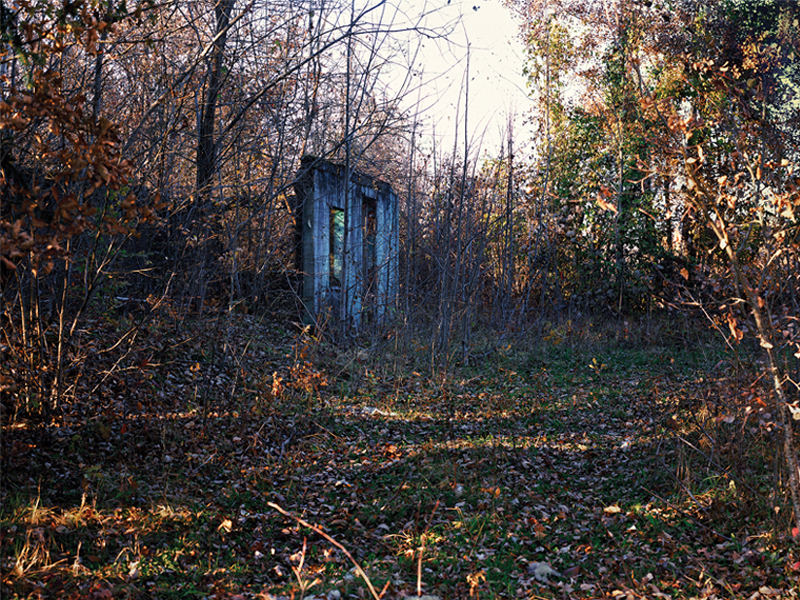 Sandra Vitaljić’s Infertile Grounds are landscapes, a reistic view of nature and terrain, presented in their specific beauty or ugliness. As in the old Dutch masters of painting, the landscape speaks through the light characteristic of the area. It is a representation of nature as the harmony of the world where, when we include the context, it demonstrates indifference to the misdeeds of people. These places are locations of crime, in a discourse opposite to the one by which Benjamin places Atget’s urban landscapes in the same category. Atget’s photographs are potential backgrounds of criminal suspense, while Infertile Grounds are, literally and topographically exactly, the actual scenes of murders and executions; the places of the executioners’ going astray and downfall and the victims’ cruel tragedies.

From the introductory text by Aleksandar Kostić

The landscapes in the Infertile Grounds series of photographs are marked by trauma, historical events and human experience. Woods, fields and rivers are part of folk tales and myths, but have also become part of a rhetoric legitimizing political systems and ideologies. Names like Jasenovac and Bleiburg went beyond their topographical referentiality and, each time they were mentioned, included different possible interpretations and contextualizations. I was interested in places that political rhetoric had used copiously in inflammatory speeches during the 1990s, places of institutionalised memory as well as those that would never be marked by a single memorial plaque. As after World War II, so after the war in the former Yugoslavia, the politics of memory labelled what ought to be remembered, and suppressed what was desirable to forget.
In the Infertile Grounds series, I endeavour to create a place of memory within the space of the photograph, an alternative memento that is not created by ideology, but rather by the need to open up the space of remembrance for victims who are never going to acquire their own space in the official culture of memory. Dotrščina
The woods of Dotrščina, in the north-eastern part of Zagreb are one of the sites where executions took place during the Independent State of Croatia (NDH). It is estimated that around 7,500 people were shoot at the site.
Among the victims were Croatian intellectuals and politicians Ognjen Prica, Božidar Adžija, Zvonimir Richtman and journalist and publicist Otokar Keršovani, who were shot on July 9th, 1941 as retaliation for Partisan activities. Croatian poet August Cesarec was also executed there on July 15th, 1941.
At Dotrščina, several monuments were raised, but some of them were damaged during the 1990’s. Ključ Brdovečki
While working in the fields in the spring of 2009, some villagers of Ključ Brdovečki discovered a mass grave. Allegedly, members of the Croatian regular military units called domobrani (Home Guards), civilians and soldiers of the German Wehrmacht Blue Division were buried there. They were executed by members of the Yugoslav liberation units (Partisans) in May 1945. After the corpses were buried, the villagers poured lime over them to neutralise the unbearable stench that spread throughout the village. These events were not talked about in the socialist period and are still disputed by many. Despite the announcements in the media, excavation and exhumation have not yet started and the exact number of victims is not known. According to some unreliable sources, the number of the victims could be several thousand. Bučje
At the very beginning of the Croatian War for Independence, the Serbian rebels, assisted by the forces of the Yugoslav Army, organized a concentration camp in Bučje, near Pakrac. The prisoners were held in the building of the veterinary clinic. A dozen women were detained in a separate area. The camp was operational from August to December 1991. More than 300 Croatian soldiers and civilians were detained in the camp at various times. They were tortured, starved, beaten and humiliated. Twelve people were killed and the fate of 41 people is still unknown. After disbanding the camp, the detainees were taken to Stara Gradiška prison and they were exchanged in January 1992 under the supervision of the International Red Cross. No one has yet been convicted for the crimes at the Bučje camp. Medački džep
On September 9th, 1993 the Croatian army launched the military operation  Medački džep(Medak Pocket), with the aim to reduce the pressure of the forces of the Republic of Serbian Krajina on the city of Gospić from the area of Medački džep, which included the villages of Divoselo, Čitluk and Počitelj. Although Croatian forces had achieved a tactical victory and temporarily pushed Serbian forces out of the area, the operation was marked by controversy because of skirmishes between the Croatian army and UN forces, and war crimes committed against the Serbian population. After the operation,  36 Serbian civilians were killed, most of them older than 60. Serbian properties were systematically looted and destroyed, so that the Serbian population would not return. In 2000, 11 more corpses were found hidden in a septic tank in the part of the town that used to be inhabited by Serbs. Although part of the Serbian population has returned to the area, Medački džep is still largely abandoned. Sljeme – Adolfovac
On December 7th, 1991, around 11PM, five reservists of the Croatian police (so-called Merčep’s  death squads) entered the apartment of the Serbian family Zec in the Trešnjevka neigbourhood in Zagreb. Mihajlo Zec, who tried to escape, was killed on the spot. His wife Marija and 12-year-old daughter Aleksandra, who witnessed the murder, were taken in a van to the mountain lodge Adolfovac on Sljeme. They dug a hole in front of the lodge, brought Marija and Aleksandra to it and fired several shots at them. Although the killers Igor Mikola, Nebojša Hodak, Siniša Rimac, Munib Suljić and Snježana Živanović  pleaded guilty before the investigating judge, they were acquitted due to some procedural errors during the investigation. In 2004, the Croatian government decided to pay a one-time financial aid to the surviving members of the Zec family in the amount of HRK 1.5 million. Subsequently, their lawyer withdrew a lawsuit against the Croatian state in the Zagreb Municipal Court. Adolfovac was burned down in 1993. Once a popular mountain lodge, today it is just a forgotten ruin.

Sandra Vitaljić graduated with an MFA in photography from the Academy of Performing Arts, Film and TV (FAMU) in Prague and completed her doctoral studies (PhD) in history and theory of photography at the same university. In her work, she is focused on social issues and dealing with the topics of domestic violence, collective memory and the construction of national identity. In the theoretical and curatorial work, she is engaged with conflict photography and the ethics of photographic representation.
She was awarded ArtsLink residence at the Ansel Adams Center for Photography in San Francisco (1997), a Fulbright fellowship at the Rochester Institute of Technology (2006/7), CCN Award in Graz (2013) and first award at T-HT@MSU – Award for Croatian Contemporary Art (2014).
Sandra Vitaljic published three books: Infertile Grounds (Eikon Studio, 2012), War of Images – Contemporary War Photography (Algoritam, 2013) and Up Close and Personal: War in Croatia (Image of War Museum, 2018).
She exhibited in many solo and group exhibitions including Natural Histories. Traces of the Political, at MUMOK, Vienna, 2017; Vigilance, Struggle, Pride: Through Her Eyes, Zagreb–Maribor–Berlin, 2018 and Beloved at Chobi Mela VII, Dhaka. She curated exhibitions Lessons from 1991 (DZZ Maribor, Organ vida, Zagreb 2016) and Up Close and Personal: War in Croatia (Image of War Museum, 2018).
Currently, she is based in Stockholm.

The exhibited works are the property of the Museum of Modern and Contemporary Art in Rijeka.