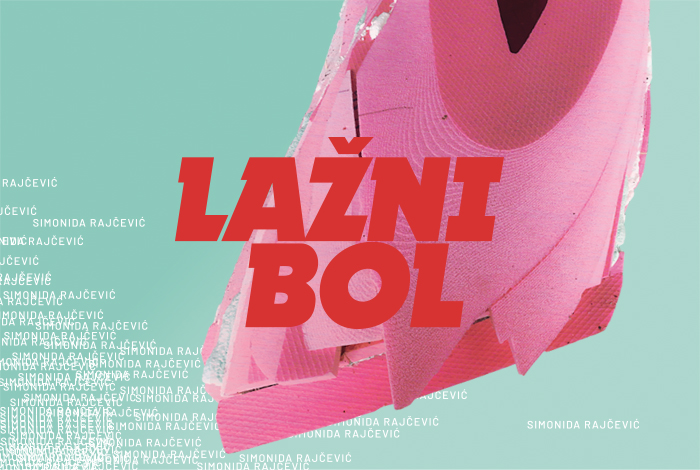 Simonida Rajčević’s canvases have a way of pulling us into the antagonism of the meaning of the aesthetic as an operative but also unstable concept in today’s art, especially contemporary art. The state of human calmness and resignation, which informed the paintings from the previous cycle titled Strange Waves, evolves in the new exhibition, Fake Pain, into the state of vulnerability. In canonized artistic images of committed violence, which testify to the history of human brutality, archetypal pain persists with a view to moving the body that does not react and the victim who is giving up. Such distance from the usual manifestations of the affective experience in the world in which we live, or the suspension of one’s own sensory experience for the sake of experiencing what carries the potential of the general or common, is exactly what aesthesis refers to in its ancient meaning of the experience of humaneness. However, what prevents the fulfilment of one such aesthetic experience through a liberating common understanding of the world is precisely the lie which introduces antagonism into the contemporary meaning of the concept of the aesthetic.

What is in fact fake about the painful awakening of humaneness through the painted scenes of tortured human parts? Is individual, alienated experience of pain fake, or perhaps the collective notion of what this pain is? Or is perhaps fake what pain should bring forward through art? Can pain even offer us the satisfaction of liberation in tragedy, which is, as Aristotle claimed, the highest form of art which produces catharsis? Or has catharsis become an affective lie over time, one that does not speak of experiencing social and political reality, but of individual escapist discomfort within it?

We are faced with images in which the holy scenes of martyrdom from the past are implied, overlapping with the bright colours and immediate contours of human bodies of the present. Through the universal body of the white modern man, outlines emerge of El Greco’s fatally tortured bodies of Jesus (The Holy Trinity canvas) and St. Sebastian, and Caravaggio’s cut-off head of Goliath (David with the Head of Goliath) and St. Peter’s nailed hand (The Crucifixion of Saint Peter). Zurbarán’s representation of Jesus as God’s Lamb (Agnus Dei), which takes all the sins of mankind unto itself, appears on the canvas in which the universal male body – set in opposition to the zoomorphic, passively reclining body of Christ – is coded differently. In this painting, the last in the cycle, we can see arms ready to fight, to defend the victim; arms that in the very end lead us to Bruce Lee, the unbeatable icon of the 20th-century popular culture. The layers of meaning of these paintings live their own historicising through pain, which again and again resurfaces as palimpsest, transforming archetypal violence into the mechanisms of ruling the world.

The sights of universal anguish, suffering, and pain of mankind, which intermittently fade and then resurface from the past in times of crises, conflicts, and wars, appear in the paintings by Simonida Rajčević as fragments, metonymic images and relationships through which a logical connection is established with the anguish of the modern man in global neo-colonial capitalism. The body of the homo economicus of today, which systemically produces itself, is moved by bright fluorescent colours, historical narratives of suffering, and its own vulnerability in the world in which it lives alienated. Paused at the moment of twitch, this dominant body of today becomes an aggressive means manipulated and controlled by pain. What has also originated from this universal coding of pain is the global society of today, which exploits, punishes, and dehumanises, and also consistently performs violence over everything that deviates from its perfect and uniform image of the world. In other words, the disintegrated structure of the wakening and reassembling body also speaks of the fact that our global civilisation has always been and still is Eurocentric, white, Christian, and patriarchal. Built and disciplined through repeated renewal of violence, this civilisation indicates to us the impossibility of eliminating what is a basic, social and politically structured human affect – pain.

This exhibition also contains an oversized sculpture of Bruce Lee’s fists of fury, which point to the ambient transgression of the two-dimensional space of a painting, as well as to a push beyond its meaning through the fiction of ultimate strength and uncompromising fight. In a position somewhat different from the one in the painting, these arms are placed at zero degree of both attack and defence. Identification with these arms is possible from any position because victory over the ultimate evil is never brought into question, which makes both attack and defence allowed. Still, it is clear that this iconic figure of Bruce Lee was too created within a sphere of popular culture, built, like those before it, by the same structural mechanisms of the colonising, that is, globalising world.

Transferring or delegating one’s own satisfaction with victory over violence onto fiction, mass culture, or objects, speaks of the interpassive experience[1] of freedom, which is in fact fake, as is the pain with which we identify before the very act of winning. Embodied sensuality, the state of vulnerability, and the feeling of pain are in this way prey to the interpassive experience of the world, which in this case is aware of its fakeness. In this awareness, however, there is the new aesthetic potential looming in the paintings which depict parts of the tortured human and animal bodies. If we can imagine this potential, following Rosi Braidotti, a hybrid figuration of a completely different monstrous body[2] will appear before us, a body which in its continuous vulnerability, exhaustion, and oppression still gives resistance and fights for the birth of a new materialistic cartography of a better world. The question that this exhibition leaves us with is: Can we even imagine this world with a different and from the global man’s perspective “monstrous” body, which goes beyond the globally existing archetypes of today’s civilisation to offer us some other and perhaps real emotions?

[1] The concept of interpassivity is one of rare concepts of contemporary philosophy, developed since the 1990s by Robert Pfaller. See more in: Robert Pfaller. Interpassivity: The Aesthetics of Delegated Enjoyment. Edinbourgh: Edinburgh University Press, 2017.
[2] For more details on becoming a monster in the global world of modern capitalism, colonialism, and patriarchy, please refer to Between Monsters, Goddesses and Cyborgs: Feminist Confrontations with Science, Medicine and Cyberspace. Nina Lykke & Rosi Braidotti, (eds.). New Jersey : Zed Books, 1996, as well as to other books by Rosi Braidotti, who writes about the ethics and biopolitics of human and non-human, i.e., post-human individual and social structures today.