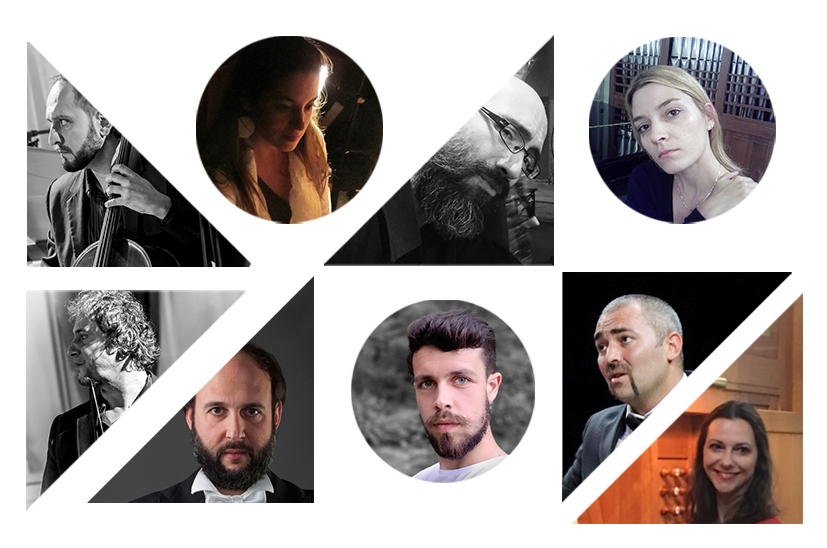 Because of the health and safety guidelines for suppression of the epidemic, the number of attendees in the Blessed Virgin Mary Cathedral is reduced to 100, so it is important to book your seat by e-mail lidija.maric@kcb.rs or by phone 011 2622 058 until noon at the day of the concert.
We remind you that it is necessary to wear safety masks and to keep 1.5 meters apart from each other during your stay in the Cultural Centre of Belgrade.

Biographies:
Danilo Novaković (1973) studied at the Faculty of Music with Aleksandar Pavlović, and graduated in 1995 as one of the youngest students. He continued his violin studies in the Netherlands with Emmy Verhey and Chris Duindam, and later at the Codarts in Rotterdam with Benzion Shamir. He graduated as a baroque violinist at the Utrechts Conservatorium with Antoinette Lohmann in 2005. Danilo has performed as a soloist with the Codarts chamber orchestra, the symphony orchestra Carpe Diem from The Hague, the Macedonian Philharmonic Orchestra, and the chamber ensemble Interfest Bitola. As a chamber musician, he cooperated with members of the Belgrade Philharmonic Orchestra, the Royal Concertgebouw Orchestra, and the Rotterdam Philharmonic orchestra. Danilo is the founder of the baroque ensemble Tempera Barocca, with which he has performed at festivals and concerts throughout Europe. He is also a guest concertmaster of the Rotterdam Baroque Ensemble, Leiden Baroque Ensemble, and the Barcelona Teatre Lliure Chamber Orchestra. He is a permanent member of the Strings of St. George ensemble. Since 2018, he has been the music selector of the Easter BaROCK Festival in Germany. Danilo is a member of the Belgrade Philharmonic Orchestra and the chamber orchestra Sinfonia Rotterdam.

Đorđe Milošević (Beograd, 1979) graduated cello at the Faculty of Music in 2004, where he studied with Relja Ćetković and Sandra Belić. In 2005 he received a scholarship from the Ministry of Culture, Higher Education and Research of Luxembourg, where he finished Superior level studies at the Conservatory of Luxembourg with Claude Giampellegrini. He attended numerous master classes for cello and chamber music and worked with many renown cellists – Martin Löhr, Alban Gerhardt, Stanislav Apolin, Ksenija Janković, Imre Kalman, Paul Gulda, Michael Uhde, and others. Whilst he studied in Luxemburg, he frequently performed with contemporary music ensemble Luxembourg Sinfonietta all around Europe. Đorđe is one of the founders of the Belgrade Baroque ensemble which he performed with in Serbia and Sweden. He is also a member of Mokranjac String Quartet, ensembles Metamorphosis, Nymbus, and Tempera Barocca, and the international orchestra Balkan Baroque Band, which he performed and recorded with for ERT and European Broadcasting Union.  Đorđe performs also as a soloist, interpreting the music of all periods, including works of contemporary Serbian composers. He is currently teaching cello at music school Mokranjac in Belgrade and Faculty of Arts in Zvečan, and is a member of the Association of Musical Artists of Serbia (UMUS).

Lana Jelenković (1981) graduated and obtained her master’s degree in organ performing at the Faculty of Music in Belgrade. She completed her postgraduate studies in organ at the Faculty of Music in Würzburg, with Christoph Bossert. She graduated historical keyboard instruments at the same Faculty and received her master’s degree in harpsichord with Glen Wilson. Simultaneously, she completed the International Master Studies of Organ Expert at the Faculty of Music in Trossingen and at the University of Tor Vergata in Rome. These unique expert studies included professional courses in the construction, restoration, and reconstruction of organ, and her master thesis included the preparation of technical documentation for the famous organ in the Trade Union Hall in Belgrade. She has been regularly participating at the Dies Organorum and Ars Vivendi Clavicembalum festivals in Belgrade, as a performer and associate. Lana frequently performs in Serbia and Europe as an organist, harpsichordist, and accompanist. She cooperates with various orchestras, choirs, and ensembles from Germany, as well as the Strings of St. George, Metamorphosis, Camerata Akademika, Belgrade Philharmonic Orchestra, and Tempera Barocca (as a permanent member) from Serbia. She is a member of the Association of Musical Artists of Serbia. Since 2016, she has been working as an accompanist for classical and contemporary ballet.

Aleksandar Solunac (1978, Belgrade) finished his studies at the Faculty of Music in Belgrade with Mladen Đorđević. He continued studying at the Norwegian Academy of Music with Bengt Eklund and received the Artist Diploma – Master of Music Performance. During his studies, he played in orchestras such as Mediterranean Youth Orchestra, RTS Symphonic Orchestra, and others. Since 2011 he is holding the position of principal trumpet of Belgrade Philharmonic Orchestra. As a member of the orchestra, he has performed in Europe, Asia, and the USA. He performed solo and as a member of chamber ensembles at numerous music festivals in Belgrade and Serbia. As a soloist, he played with RTS Symphonic Orchestra, The Norwegian Radio Orchestra, and Belgrade Philharmonic Orchestra.

Milan Stančić (1981) graduated music pedagogy at the Faculty of Music in Belgrade. He studied solo singing with Predrag Đoković, Vanja Trajković, Nenad Nenić, Janja Vuletić, Valentina Taškova, and Jasmina Stojković. He was an active participant at the Belgrade Baroque Academy under the leadership of Marijana Mijanović and Predrag Gosta. Milan performed in Purcell’s opera Dido and Aeneas at the National Theatre in Belgrade, as well as Leoncavallo’s Pagliacci, and two Monteverdi’s operas – Coronation of Poppaea and L’Orfeo in Madlenianum. He is a member of the vocal ensemble of the Studio for Early Music under the artistic direction of Predrag Đoković. He has collaborated with ensembles such as VisAntiqua, Traveling Musicians, Nymbus, Renaissance, Ecumenical Male Choir, the vocal ensemble of the New Belgrade Opera, and many others. He performed in Hungary, Bulgaria, Italy, Austria, and the United Kingdom. Milan is currently studying singing at the Academy of Arts in Bijeljina with Verica Pejić.

Milica Sabljić studied organ with Maja Smiljanić Radić at the Faculty of Music in Belgrade, where she graduated in 2005. In 2007, she enrolled in undergraduate studies of concert organ at the University of Music and Performing Arts in Graz, with Dalibor Miklavčič, and later Ulrich Walter, graduating in 2011. During her studies, she won scholarships from the Rotary Foundation in Düsseldorf, the association Friends of the University of Music and Performing Arts in Graz, and the Martha Debelli Foundation in Graz. Milica is a frequent participant at the Days of Organ festival in Belgrade. She attended master classes with Jon Laukvik, Ludger Lohmann, Yves Rechsteiner, Gunnar Idenstam, Carlo Hommel, and Johann Trumer. She has performed concerts as a soloist and chamber musician in in Serbia, Austria, Italy, and Slovenia. Milica is a member of the Association of Musical Artists of Serbia (UMUS). She worked as a piano associate at the Lujo Davičo ballet school, and currently works as an organ teacher at the music schools Josip Slavenski and Kornelije Stanković in Belgrade.

Branka Đorđević (Belgrade, 1979) studied organ with Andrija Galun and obtained her master’s degree with Maja Smiljanić Radić from the Faculty of Music in Belgrade. She also studied at the Conservatory of Music in Luxembourg with Jean Jacques Kasel, a student of the organ legend Jean Guillou. She attended numerous courses led by eminent European organists in Belgrade (as part of the Organ Days festival), Ljubljana, Timisoara, Brussels, Luxembourg, and Paris. Branka performed many concerts as a soloist and as a member of chamber ensembles and orchestras. Within the project Children play the organ, she collaborated with music schools Kosta Manojlović in Zemun, Vatroslav Lisinski in Belgrade, and Josif Marinković in Vršac, holding master workshops and concerts.  Since 2001, she has been following the practice of recording her concerts, all with the aim of popularizing this exceptional instrument and enriching the cultural life in Serbia. As the vice-president of the association Friends of the Vršac Organ, she was engaged in the preservation of organ, as a cultural treasure and heritage of ​​Vojvodina. She currently teaches piano at the music school Josif Marinković in Vršac.

Đorđe Gavrilović (Užice, 1991) started studying piano when he was eight years old, at the music school Petar Konjović. At the age of 16, he became an assistant conductor of the church choir St. George in Užice. He started learning the organ in 2011 at the music school Stanković with Marija Čubrilo Družijanić, and since then he has frequently performed as an organist. He was the conductor of the church choir in Ub, and since 2017 he has been conducting in the Church of Saint Petka in Surčin. His aim, as the conductor, is not just the improvement of the choir but also the organization of numerous music events. Since 2011, he has been regularly attending the Summer Organ School of the Dies Organorum Festival, actively participating in the workshops of renowned organists Dalibor Miklavčič, Alexei Parshin, Jörg Halubek, Shin Yang Lee, William Whitehead, Pietro Pasquini, and others. In European music centers, he had the opportunity to attend courses by Hans Fagius and Cameron Carpenter. He also participates at the Dies Organorum festival as a performer and associate.

Marko Đorđević (Leskovac, 1985) graduated clarinet at the Faculty of Music in Belgrade with Ante Grgin. During his studies, he has won many awards at festivals, national and federal competitions. Marko performed many concerts in Serbia, Spain, France, Portugal, Poland, and Japan. He was a regular member of the Faculty of Music Symphony Orchestra. In a duo with an organ, Marko performed a tour in Serbia.  He is a co-founder of the Infiniti quintet and the founder of the Sirius quintet. He founded the Youth Orchestra Svetlost at the Youth Cultural Centre of Smederevo and became its first conductor. He recorded CDs with the Amoroso Orchestra and as a member of a chamber duo. Marko performed as the first clarinet of the Smederevo Philharmonic Orchestra and as a member of the chamber ensemble of the Kir Stefan the Serb Choir.  He currently works as a professor of clarinet and saxophone at the music school Kosta Manojlović in Smederevo.

The Chamber Music Concert is a tradition that began in 2005, and the ‘responsibility’ to create and prepare the program belonged to local musicians, occasionally joined by friends from abroad. Lana Jelenković, Milica Sabljić, and Branka Đorđević performed the first such concert on June 26, 2005, as the opening event of the 5th edition of the Festival. In addition to performing at the Days of Organ, they were participating in the Summer Organ School and were part of the organization team. With their creativity, contacts, and great effort, these three women substantially contributed to the development of the Festival.