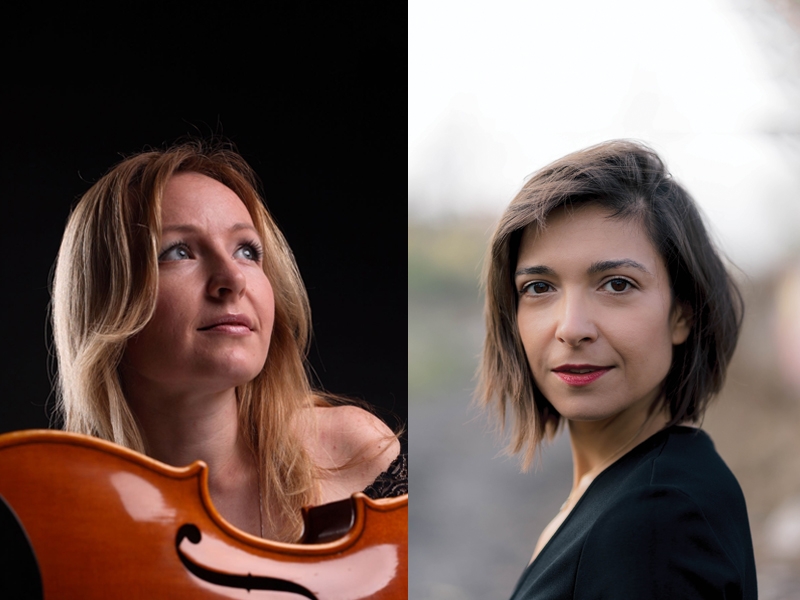 According to the safety guidelines regarding the current situation of the pandemic, this fall the Cultural Centre of Belgrade will start traditional concert season Concerts in Gallery under special conditions. Programs will be held every Monday at 20:00 in the Artget Gallery.
Because of the health and safety guidelines for suppression of the epidemic, the number of attendees in the Artget Gallery is reduced to 25, so it is important to book your seat by e-mail lidija.maric@kcb.rs or by phone 011 2622 058 till noon at the day of the concert.
We remind you that it is necessary to wear safety masks and to keep 1.5 meters apart from each other during your stay in the Cultural Centre of Belgrade.

Biographies:
Nataša Petrović – viola professor, soloist and chamber musician. She graduated at Faculty of Music in Belgrade and obtained her postgraduate studies degree in the class of professor.
Petar Ivanović, as well as Doctoral degree in class of professor Dejan Mladjenović. She was awarded a scholarship at the Guildhall School of Music & Drama in London, to study with  prof. David Takeno, where she received her master’s degree.
The concert engagements include performances in Serbia, France, Great Britain, Greece, Italy; concerts in London in Sadek Cathedral, LSO St. Lux Church, Barbican Hall, Wigmour Hall, St. John Smith Square Hall, as well as in all major halls in Belgrade. She has participated in all important domestic and international music festivals, performing premieres at the Festival of Classical Music of the XX and XXI century, KOMA and at the Tribina kompozitora. She made a permanent TV recordings as a soloist and have recorded for TV Kragujevac, TV Novi Sad and Radio Belgrade. As a member of orchestras and chamber ensembles she recorded over 10 CDs.
Nataša has been a member of the String Chamber Orchestra of St. George (1992-2014), with which she has performed as a soloist; she has given numerous concerts as a member of the Ensemble Metamorphosis (2014-2018), the Žebeljan Orchestra and the NBO Orchestra without Borders.
She was teaching at the School for Musical Talents in Ćuprija and she was an assistant of prof. Petar Ivanović at the Faculty of Music in Belgrade. Nataša Petrović is currently employed as a Viola full professor at the Faculty of Philology and Arts in Kragujevac.

Bojana Dimković leads a versatile career as a concert pianist, harpsichordist and lecturer. She holds a position at the University of Niš ̵ Faculty of Arts and is in great demand as a chamber music partner.
Concert engagements include performances in the UK, Serbia, Slovenia, Montenegro, Italy, Republic of Ireland, Norway and Island. She has performed at Wigmore Hall, Royal Festival Hall, Buckingham Palace, Cheltenham Festival, Oxford Lieder Festival and is a regular guest at all major festivals in Serbia.
As a soloist Bojana appeared with Die Kölner Academy, Radio Television Serbia Symphony Orchestra, St. George Strings, The Early Music Experiment and New Trinity Baroque. As a chamber musician and continuo player she regularly collaborates with Sasha Mirkovic & Ensemble Metamorphosis. She is frequently invited as staff accompanist for Belgrade Baroque Academy and Austria Barock Academy.
As an active promoter of new and neglected repertoire, Bojana is a founding member of the Szumanski/Dimkovic duo with baritone Krzysztof Szumanski. In the past few years she has been involved in world premieres of over thirty works of living composers, many of which were dedicated to Miloševic/Dimković cello and piano duo.
Bojana is a previous holder of the Henry Richardson Award (Musicians’ Benevolent Fund), a Wall Trust scholar, winner of the Petar Konjović competition and finalist of the Kathleen Ferrier Awards, Broadwood harpsichord competition and Royal Overseas League among many others. She holds degrees in Music from the Guildhall School of Music and Drama (piano and harpsichord) and a Doctoral degree from the University of Belgrade.