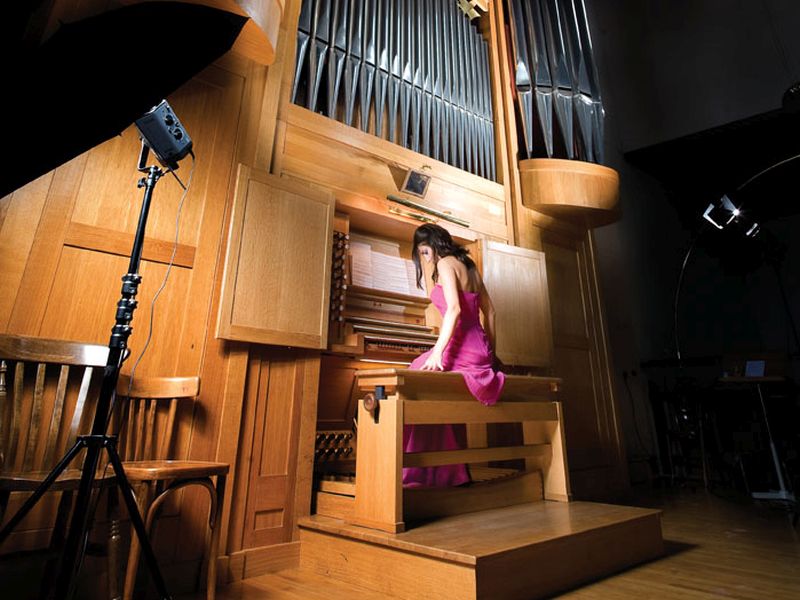 Biographies:
Maja Smiljanić-Radić received her master’s degree in organ from the Faculty of Music in Belgrade, where she studied with Andrija Galun. She also studied with renowned organists and pedagogues such as Guy Bouvet, Jacques van Oortmerssen, Marie-Claire Alain, and Jean Ferrard in Switzerland, Belgium, France, and Poland. She has performed as a soloist, chamber and orchestral musician in the country and abroad, with many musicians, including Mladen Đorđević, Miljana Popović Materni, Emina Smolović, Ivan Marjanović, Magda Skračić, and others. She has played with the Early Music Ensemble, St. George’s Strings, with choirs – Mokranjac, Baruch Brothers and Liceum, RTS Symphony Orchestra and Choir, Belgrade Philharmonic Orchestra, philharmonic orchestras from Arad (Romania), and Bialystok (Poland), under the direction of conductors Bojan Suđić, Alexander Rahbari, Mladen Jagušt, Vladimir Kranjčević, Philip Walsh, Aleksandar Marković, and others. Her solo concert at the Peterborough Festival in the United Kingdom (2009), a tour in the United States and Canada in organ and piano duo with pianist Nenad Radić (2010), performances in Slovenia, and a solo concert at the 28th International Tribune of Composers in Belgrade, where she premiered five compositions, are just a few of her many performances. Maja Smiljanić is a member of the BIZZARE ensemble, which features organ, piano, harpsichord, guitar, harp, and percussion in a non-traditional composition. She has performed dozens of solo concerts in Belgrade and throughout Vojvodina, as well as numerous recordings and radio and television appearances. Her foreign appearances are always a form of promotion for domestic organ work, and she plays works by Ivan Jevtić, Vladimir Tošić, Vera Milanković, and Vlastimir Trajković at concerts regularly. She presented a lecture on Serbian Organ Music at the University of Musicology in Opole, Poland, and the Summer Organ Academy in Pula, Croatia, which was published in the international magazine Folia Organologica. She covered music for Radio Belgrade and TV Studio B, as well as writing music critics for the newspapers Naša Borba and Politika. Maja co founded the Association of Organists Ars Organi and the first Organ Music Festival in Belgrade in 1996 with Professor Andrija Galun. She also appears in the Serbian edition of the Institute for Textbooks’ encyclopedia Who is Who (2010). At the Music School Stanković, she established Serbia’s first organ department in a music school (1995). She is a professor of organ and the head of Belgrade Faculty of Music’s Poly-instrumental Department.

Violinist Jelena Dragnić obtained her Master’s Degree from the Faculty of Music in Belgrade, in the class of Prof. Dejan Mihailović. She received advanced training through courses with Christiane Hutcap and Igor Ozim. Also, as a holder of the Walter Stauffer Foundation grant, she completed her specialist studies in Cremona, in the class of Salvatore Accardo. Under the artistic leadership of this eminent artist, she performed as member of the Musica da camera Italiana ensemble. Jelena also worked with violinist Liana Isakadze at the Summer Academy Mozarteum in Salzburg in 2010. She is a member of the Belgrade Philharmonic Orchestra, taking the position of first violin tutti, as of 2006, and first violin and one of the founders of the Belgrade Philharmonic String Quartet as of 2011. She was concert master and long-standing member of the St. George Strings Chamber Orchestra, and also frequently performed as soloist. In 2010, Jelena was invited to take part in the opera and symphony tours of the Mahler Chamber Orchestra, at festivals and during concert seasons in Baden-Baden, Luxembourg, Dortmund, Essen, Frankfurt and Paris, conducted by Kent Nagano and Daniel Harding. Jelena is also a second violin section leader in Belgrade Chamber Orchestra.