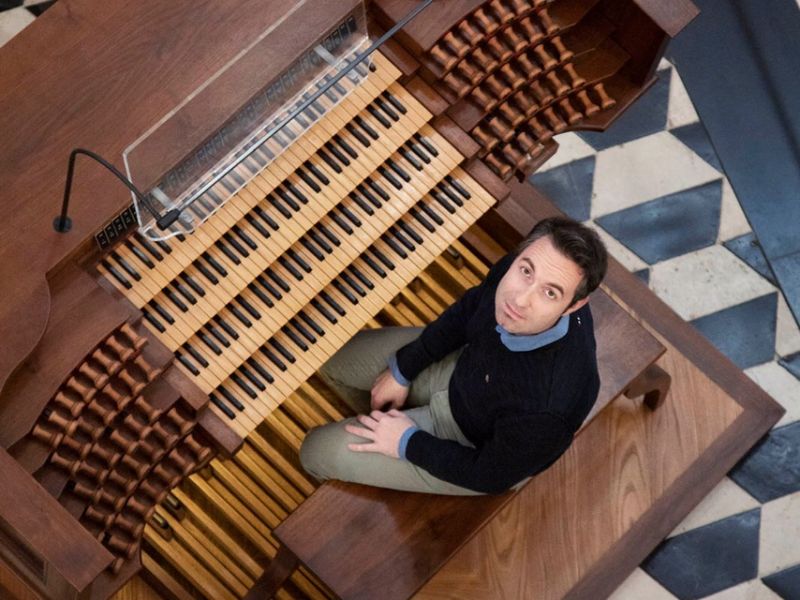 Simone Vebber is the winner of the prestigious European organ competition and the professor at the Conservatory G. Donizetti in Bergamo and the Academy of Old Music C. Abbado in Milan. For his Belgrade performance, Simone Vebber have chosen pieces of French composer and organist Camille Saint-Saëns, on the occasion of the 100th anniversary of the composers death, and pieces of Franz Liszt, who once declared Saint-Saëns the greatest organist in the world. This concert is organized in collaboration with the Italian institute for Culture in Belgrade.

Biography:
Simone Vebber was born in Trento in 1983. He studied Ancient Organ with L. Ghielmi at the Accademia Internazionale di Musica in Milan. He graduated in Organ and Piano (cum laude) at the Conservatory F. A. Bonporti in Trento (Italy). Vebber received the Concert Diploma at the Schola Cantorum in Paris, studying with J. P. Imbert and he had the First Prize in Organ Improvisation in the class of P. Pincemaille at the CNR of Saint-Maur (Paris). He participated in the interpretation masterclasses with L. Lohmann, J. C. Zehnder, Bine Bryndorf, Brett Leighton and P. D. Peretti. He won numerous prizes at the prestigious European competitions and festivals: 1st Prize in Alessandria – Italy, 1st Prize in Pistoia – Italy, 1st Grand Prize and Public Prize at the J. S. Bach Organ Competition in Saint Pierre lès Nemour – France (2005), 1st Prize at the J. J. Fux international organ competition in Graz – Austria (2010), and the Peter Hurford Bach Prize at the Competition of The St Albans International Organ Festival (2011). He has recorded for Suonare Records, Radio Vaticana, Diapason Edition, Mascioni, ORF and Discantica. He played concerts in many important organ venues and organ festivals in Vienna, Riga, Paris, Milan, Rome, Warsaw, Rio de Janeiro, etc. Vebber played as a soloist with important orchestras like the Mozart Orchestra conducted by Claudio Abbado. On the occasion of the 100th anniversary of the death of French composer and organist Camille Saint-Saëns, Vebber and the Da Vinci Publishing started the project dedicated to the complete exploration of the work by the French composer who is often too relegated to the margins of a late romanticism, and first CD has been published this year. Simone Vebber is Organ Professor at the Conservatory G.Donizetti in Bergamo and Improvisation Professor at the Academy of Old Music C. Abbado in Milan.
More