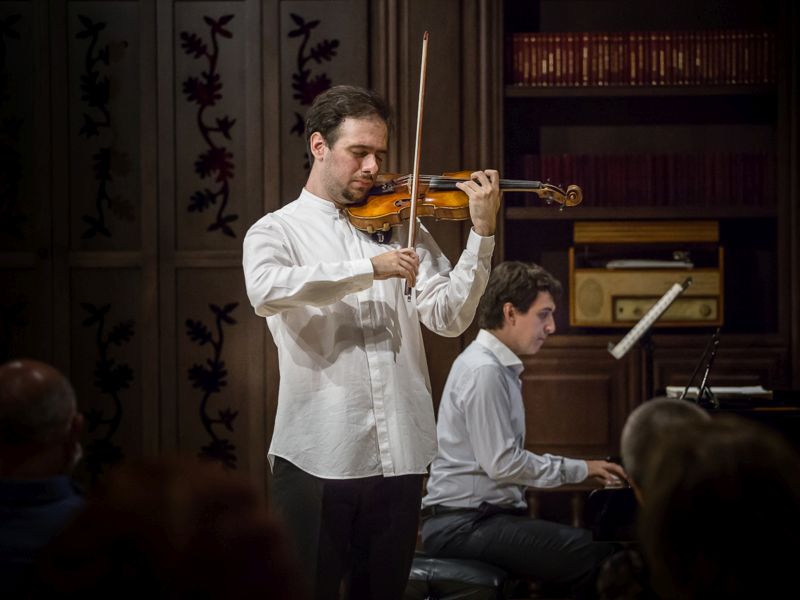 Concert is suppored by Ministry of Culture of the Republic of North Macedonia.

Biography:
Bojan Ilkoski (1992 Skopje) began studying the violin aged 7 at SMBEC Ilija Nikolovski-Luj in Skopje. His first contact with the instrument was closely followed by prof. Rumen Dimitriev, and he has graduated at the Faculty of Music Arts – Skopje in the class of prof. Oleg Kondratenko. He won multiple awards among which are: International Mozartiana-M competition (2006) – 3rd prize;  State Music Competition (2007) – 1st prize; “Ohrid Pearls” (2008) – 3rd prize; State Music Competition (2010) – special prize; “Nedyalka Simeonova” (Haskovo, Bulgaria) (2010) -3rd prize; Sixth International Strings competition in Niš (2013) – 1st prize. Ilkoski has successfully performed solo concerts in Macedonia as well as abroad: Serbia, Croatia, Bulgaria, Romania.. He also performed with the Macedonian Philharmonic Orchestra, FMU Symphonic Orchestra as well as the Chamber orchestra “FMU Soloists”. In 2009, the young violinist has performed his first solo-recital at Daut-Pashin Amam gallery. In 2013, Ilkoski forms a duo with pianist Dino Imeri and together they embark on a successful concert streak among which: “European Concert” organized by Music and Ballet Pedagogues of Macedonia, European Union of Music Competitions for Youth, Festival A-Fest in Novi Sad, Srbia, Festival “Golden Lyre”, Ohrid Summer Festival as well as a recital in Skopje during the “We are coming..” series organized by the Cultural Informative Center – Skopje and a special performance at “Salon 19,19” upon an invitation by the Spanish Ambassador to Macedonia Mr. Fernando de Galainena Rodriguez. As a well established soloist, Ilkoski also involves himself in chamber music. He has performed in Macedonia and abroad (Croatia, Bosnia) with the FMU Symphonic and Chamber Orchestra. The chamber performances enable Ilkoski to collaborate with renowned musicians such as conductor Misha Katz, violinist Francis Deroy as well as cellist Marc Coppey. This young violinist is a member of the Chamber Orchestra of the Jeunesse Musicales Macedonia with whom he has had the opportunity to collaborate with artists such as Koh Gabriel Kameda, Misha Katz, Sasha Nikolovski-Gjumar, Dijana Imeri Ilkoska, Kokan Dimushevski, Oleg Kondratenko and others, having performed at the Ohrid Summer, Bitola Summer, Interfest and Skopje Summer festivals. Ilkoski is a member of the Macedonian Philharmonic Orchestra as well as the F.A.M.E.’s – Film and Music Recording Company orchestra.