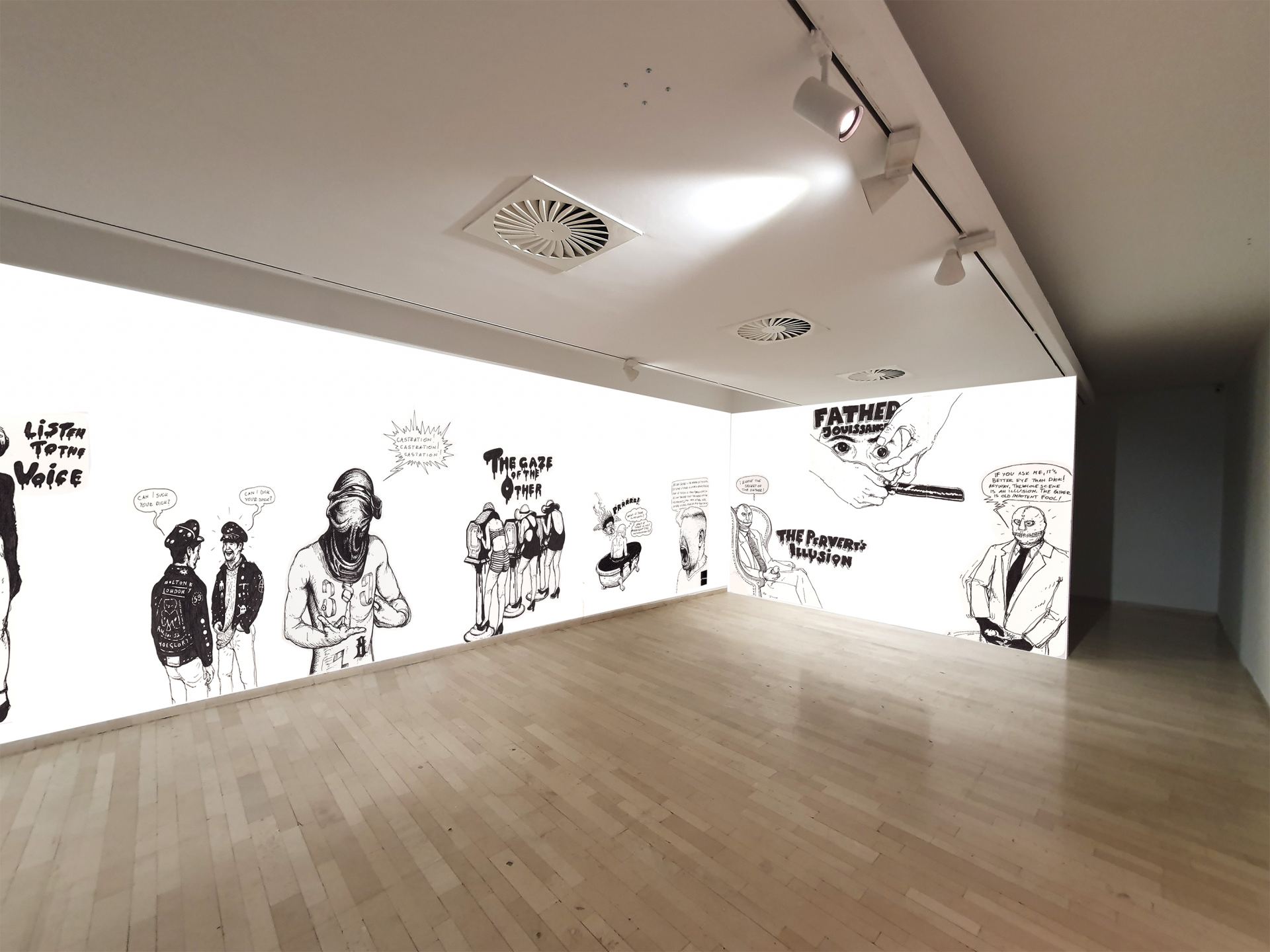 Generations who grew up on Alan Ford remember the little black notebook Number 1 and the amazing data and names it hid. Those who remember this comic book already know that it is a unique phenomenon of Italian pop culture and its reception of social and political satire that, in the form of a popular comic, parodied the world of secret agents, historical narrative, capitalism and the American dream. Predrag Damjanović uses some of these themes and formats for his new cycle of works – drawings that the audience will have the opportunity to see at the Art Gallery of the Cultural Centre of Belgrade.

The drawings will be exhibited in the form of large wall paintings printed on self-adhesive foils. In this way, they simulate large wall paintings, murals or graffiti, turning the gallery space into a street – a gallery response to street art. Although originally made in small format, their true format is that of large dimensions in which they realize their full capacity. Collaging the gallery with numerous drawings of various formats, Damjanović goes beyond the framework of drawing itself, but also beyond the framework of a comic book and boards, on which it is usually created, and makes an exhibition that functions on several levels. Entering the gallery, you enter another surreal world with no solid foundation in anything that is realistic, familiar. On the other hand, the narration itself and the comic-like presenting of the scenes, bring a new reading where the text has a very important role in forming the visual representation. Like in drawing, it is bare, sometimes cruel and extremely explicit. Its role is not only to complete narratively, but also to additionally emphasize.

The artist’s drawings are his reactions to the world we live in, his personal need to face, to process and leave a comment on everything that happens to us. The catalogue accompanying the exhibition is made in the form of a comic book, in the manner and format in which the artist himself “thought” his work. And just as the modern world is strange, contradictory and often bizarre, so these drawings are disturbing and shocking at first glance. But only at first glance, because in fact, when we look a little closer, we realize that these are, unfortunately, scenes we see every day on television, on the Internet, in the press. In them, the artist depicts various scenes, celebrities, hybrid creatures in the manner of American underground comics and street art. His creatures are provocative, on the verge of banality, funny and frightening at the same time. Combining different, often incompatible elements, Damjanović creates a world of personal impressions, a simulacrum of comic genre scenes in which Egyptian mythology, Japanese pop culture, Nazi iconography intertwine, and all spiced up with hard gay and porn elements with a touch of fiction. As an artist, Damjanović is primarily an excellent drawing artist, his characters are built in sure strokes, and this confidence is reflected in a certain ease with which all the scenes are performed. Damjanović freely cites the comic book iconography and manner, with a certain distance, which gives him space not to be a slave to the conventions of the genre. The world he creates is above all a personal experience, a possible view of the metaspace of modern reality, a space that is more reminiscent of a horror film than the real world. The form of a notebook as a kind of visual diary provides the basis for such an interpretation. However, one should not assume that it is a diary – a “mirror” of the soul, and in that sense one should not look for the autobiographical. Here, the notes are Damjanović’s comments – the world on the other side of the mirror, the dark side of society that exists on the margins, in the shadow of the subconscious, in a dream. Hence, behind the banality and humorous tone, there is always an oneiric, hallucinogenic, almost carnival moment in which everything is possible in a Rabelaisian way. Unfortunately, that world has become dominant today, both in public discourse and in subcultural life. What is interesting and especially important is that in this work one can nicely detect and follow the process of migration of symbols from once subcultural milieu to another, the official, you might say representative discourse. Although this process has been going on continuously since the very beginnings of human civilization – Rudolf Wittkower wrote about it – the process we are witnessing today is especially important because it has accelerated to the point where we can no longer separate one culture from another, one symbol from another. Now we can say with certainty that we are slowly becoming witnesses of intertwining and mixing of different cultures and influences, which consistently leads to the creation of a new global culture.

What was being created in a very specific moment and environment for the artist is now transposed into the gallery space and made available to viewers. The work is a critique of the society that has lost its fulcrum, moral criteria and empathy, a kind of common sense critique, not necessarily taking left or right positions, but trying to see things as they really are. Perhaps too harsh or banal visualization and textual explication in some segments have a role not only to enhance the impression and create discomfort in the viewer, but also to further deconstruct. The viewers will ask themselves, and with good reason: Is this the society in which we live, are these images of our everyday life?

Predrag Damjanović ( Born 1975) graduated and received Master degree in 2010  at the Faculty of Fine Arts, Belgrade, Department of Paintings. Currently on PhD studies at the same Faculty. Member of ULUS (Association of Fine Artist of Serbia). Achieved the status of the independent artist. Lives and works In Belgrade, Serbia. 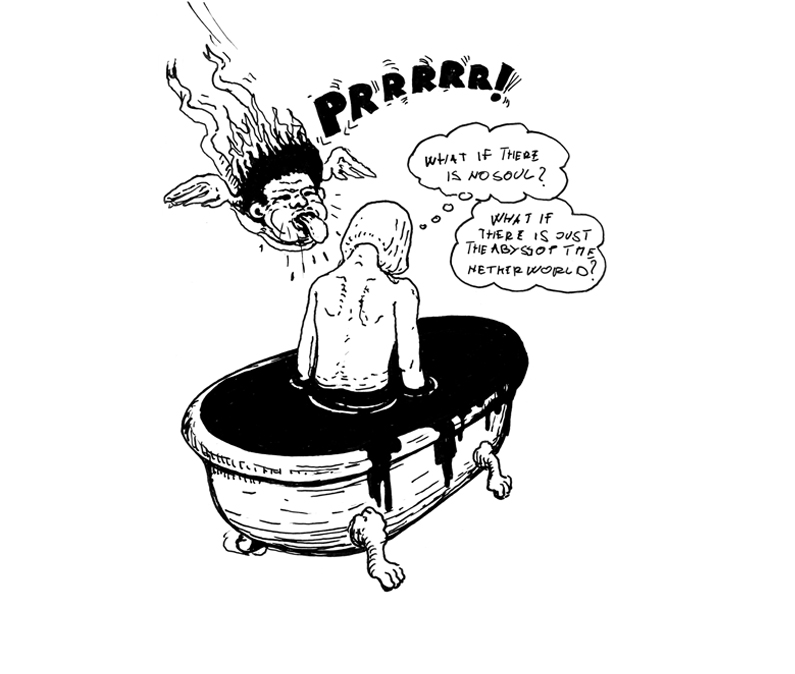 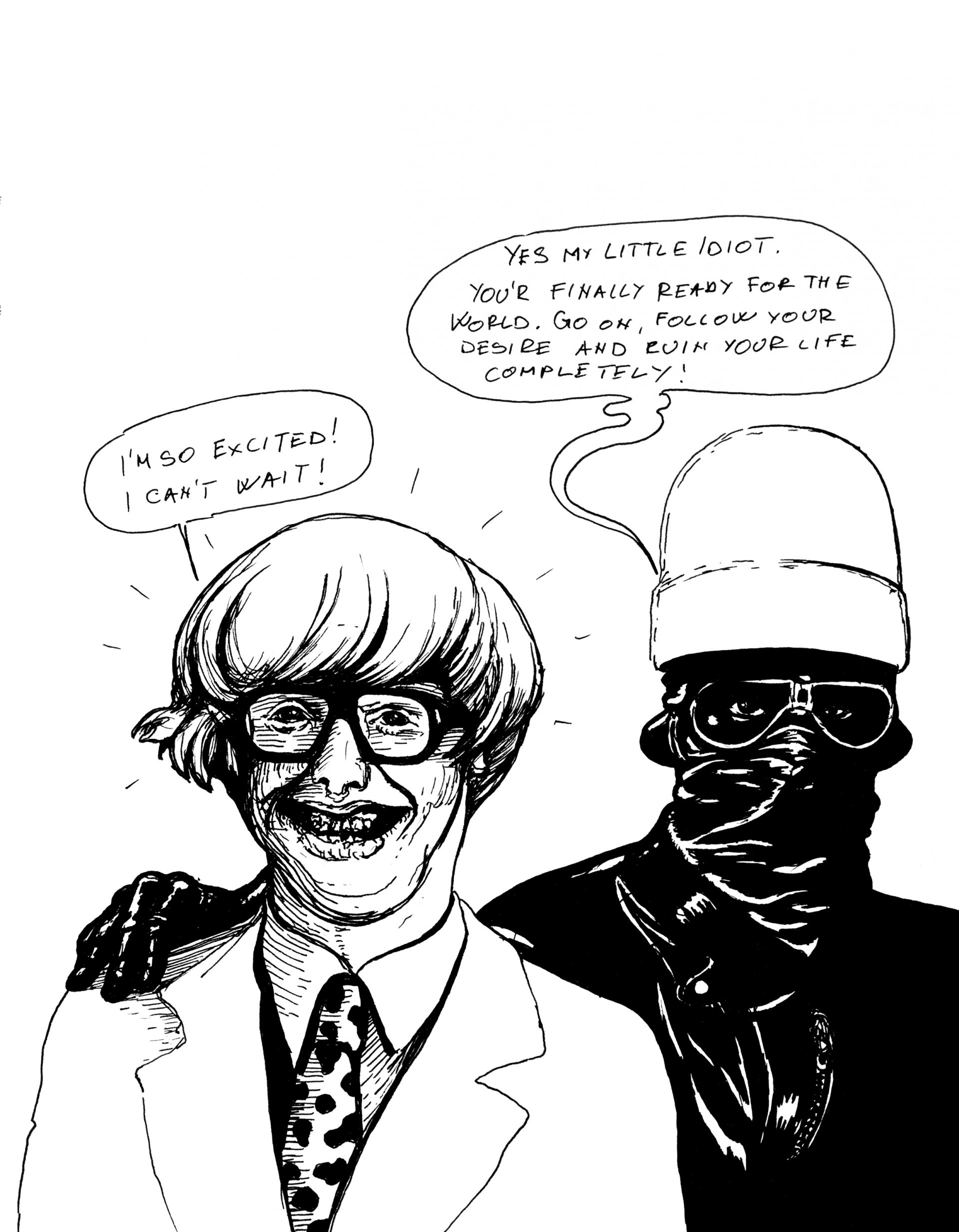 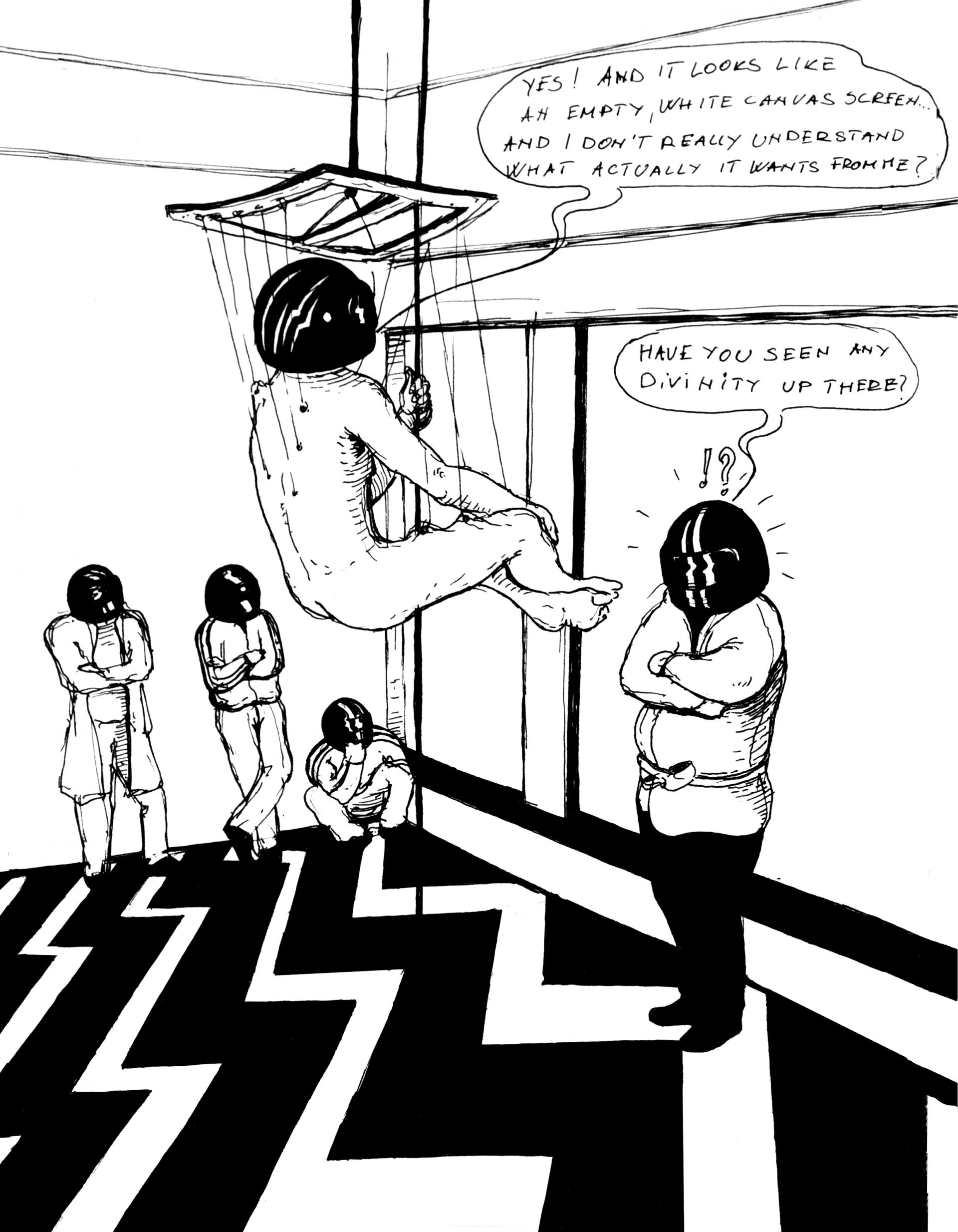 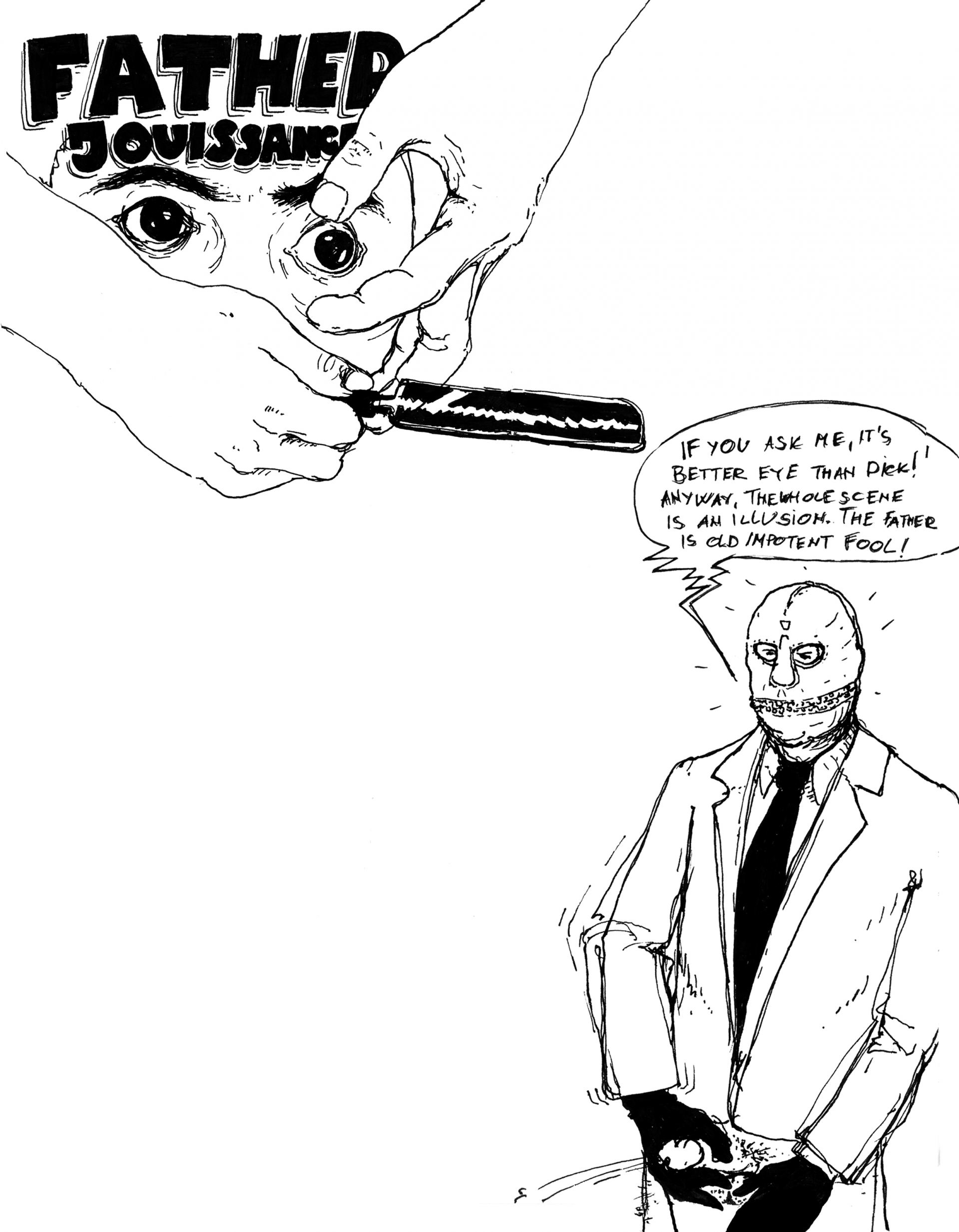