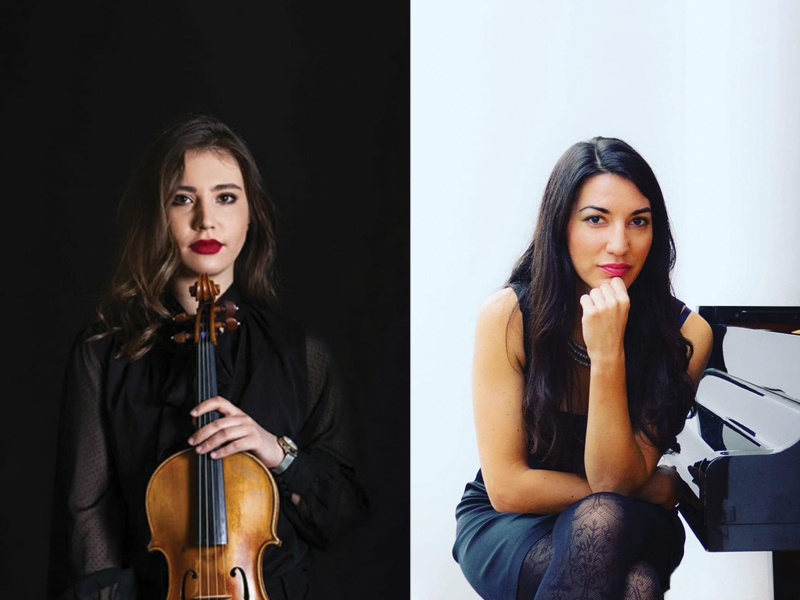 Biography:
Jana Stojanović was born in 1998 into a musical family. She received her first violin lessons from her mother Tatjana Smatlik in MS “J. Slavenski “, then she transferred to MS “Dr. V. Vučković” where she graduated violin (B.Jakšić) and viola (J.Stojanović). During high school she won numerous awards at national competitions and participated in international projects such as: Symphony Orchestra Jeunesses Musicales Suisse-Switzerland, ESYO-Italy, “MUSICA MUNDI” -Belgium (Chamber Music Masterclass). In 2017 he became a member of the National Jeugd Orchestra in the Netherlands. After graduating high school she is admitted to the Faculty of Musical Arts in Belgrade (FMU) in the class of P. Veličković. In that period she has also performed with orchestras: RTS, Camerata Serbica, Belgrade Philharmonic, etc. Then she was invited to continue her viola studies at the prestigious “International Menuhin Music Academy” (IMMA) in Switzerland in the class of Prof. Ivan Vukčević. There she became a member of the ‘Menuhin Academy Soloists’ with whom as a soloist, and within various chamber ensembles, she has made numerous appearances throughout Switzerland (Victoria Hall-Geneva, KKL-Luzern) as well as in Germany, France and Monaco. She has also had performances at numerous festivals, several of which have been at the Menuhin Festival in Gstaad. She has had the opportunity to perform with some of today’s greatest artists such as Maxim Vengerov, Renaud Capucon, Jean-Jacques Kantorow, Valeriy Sokolov, Gary Hoffman, Cecilia Bartolí, Gilles Apap, Olga Sitkovetsky, Baiba Skride, Oleg Kaskiv, Anastasia Kobekina etc. She also had the opportunity to work individually with the following artists-pedagogues: Maxim Vengerov, Pinchas Zuckerman, Gerard Causse, Vladimir Mendelssohn, Gabor Takacs-Nagy, Roustem Saitkulov, Vag Papian, Michael Klotz and others. In 2021, she performed intensively in Serbia as a soloist and a chamber musician at numerous festivals (Arlemm, Strings festival, Convivium Musicum, etc.). In the same year she was a finalist and a laureate of the prestigious Johannes Brahms competition in Austria.

Jovana Nikolić received her first piano lessons at the age of six from Prof. Zlata Maleš. Jovana has soon after won awards at numerous national and international competitions such as “Citta di Stresa”(Italy) first prize, “Carl Czerny” (Prague) special prize, as well as several times first prize winner at national competitions. At the age of 15 she was accepted to the class of Prof. Nevena Popović at the Faculty of Music in Belgrade where she graduated with distinction. At the same time she was studying at the “Schola Cantorum” in Paris with a renowned pianist Eugene Indjic where she obtained “Diplome Superieur”. In 2005 she continued her studies at the “Hochschule für Musik” in Karlsruhe, with Prof. Michael Uhde and Prof. Markus Stange where she obtained a Masters Degree in Solo Piano and “Konzertexamen” degree in chamber music, both with distinction. Jovana performs as a soloist. She has also a great passion and enthusiasm for chamber music and performs in various musical ensembles. As a permanent member of the duo with a violinist Marie-Claudine Papadopoulos she performes regularly in Germany, Italy and Serbia. The duo “Papadopoulos-Nikolic” won the first prize at the “Freundeskreis” Competition in Karlsruhe and the “Foerderpreis” at the “Felix Mendelssohn-Bartholdy Competition” in Berlin. Jovana Nikolic was awarded grants from many foundations such as the Foundation for the promotion of young artists and scientists of Serbia, the “Akademie Schloss Solitude”, the “Alfred Toepfer Stiftung” and the Rotary Club Ludwigshafen. She took part in master classes with Bruno Canino, Paul Gulda, Eduardo Hubert, Roland Keller, Elena Kuznetsova, Aleksandar Madzar, Jerome Rose, Martino Tirimo, Fauré Quartet and Minguet Quartett. She received important impulses by Eugene Injic. In 2009 Jovana Nikolic took part at the Music Festival “Brasil-Alemanha” in Rio de Janeiro, performing as a chamber musician at the “Sala Cecilia Meireles.” She was regularly invited to the summer music festival in Medulin (Croatia) as soloist. Jovana Nikolic has performed in Germany, France, Italy, Croatia, Serbia and Switzerland. Her numerous television and radio performances were broadcast on Radio 1 Belgrade, RTS 1, Nova TV and SWR.