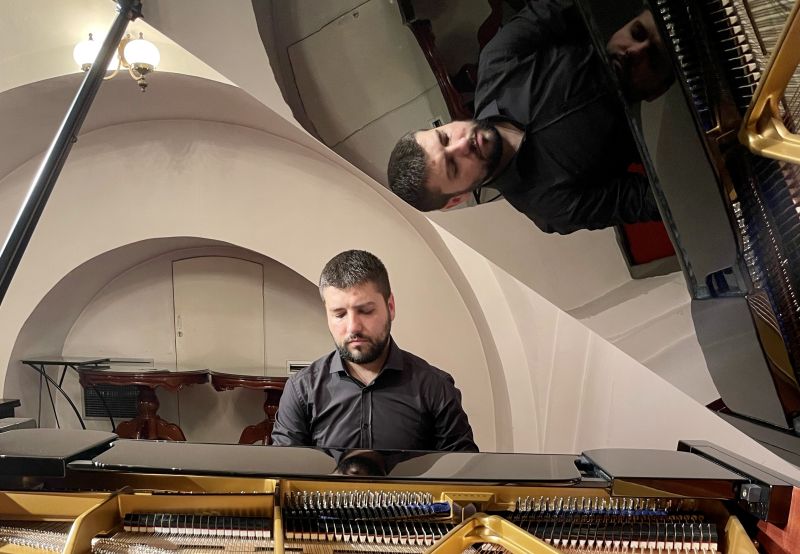 Biography:
Andrej Cincarević was born on the 30th of October, 1993. in Niš. From an early age he has been actively singing in the Church Coral Society Branko. He had his first solo singing performance when he was almost four years old. Since then, he has been a regular member of the children’s and then the standard ensemble of this choir, travelling to 28 countries all over the world, performing as a choir singer, soloist and a composer.
He finished primary and secondary music school in Niš, Piano department, in the class of Professor Mirjana Mladenović. In 2012, he started his Bachelor, then Master academic studies, graduating with the highest grade at the Faculty of Music in Belgrade in the class of prof. Maja Rajković, PhD. During his education he attended several classes with Svetlana Korunović. He attended the pianist Boris Kraljević’s seminar several times. In 2019, he passed the admission exam and enrolled in the Doctoral Academic Studies at the Faculty of Music in Belgrade, at the Piano department in Professor Maja Rajković’s class. Since 2020, he has been employed as an assistant at the piano department of the Faculty of Arts in Nis.
He has received many awards, most notably: III Prize at the Sremska Mitrovica Piano Festival, II Prize at the Slobomir International Music Competition in Bijeljina, II Prize at the International Young Pianist Festival in Šabac and I Prize at the Banja Luka Biennale International Piano Competition in 2012. in Banja Luka.
In 2016, he performed at a premiere concert with the Nis Symphony Orchestra. He held several pianist recitals, including concerts in the halls Artget of the Belgrade Cultural Center and the Guarnerius Center for Fine Arts, the Italian Cultural Center, the Cukarica Cultural Center and the Student Cultural Center in Belgrade, the Faculty of Arts’ Concert and Exhibition Hall, the music halls at schools Petar Stojanovic Ub, Stevan Mokranjac Zajecar etc. In 2015 and 2017, he performed as a vocal soloist with the choir Collegium musicum.
He is the author of several dozen arrangements as well as the compositions Empress of Silence and The Cherub Song. His compositions have been performed in various halls such as: Svetosavski dom in Niš, Ilija M. Kolarac Endowment, the crypt of St. Sava Temple in Belgrade, the F. Chopin Conservatory (Poland), Tchaikovsky Conservatory (Russia), Belgorod Philharmonic Hall (Russia). In 2018, he participated as a member of the Church Coral Society Branko at the International Choir Festival in Mexico where his arrangements were performed in the concert halls at the Autonomous University of Tlaxcala (Mexico) and the National Theater in Puebla (Mexico). In 2019, as a member of the Church Coral Society Branko, he went to the International Festival of Choral Spiritual Music State Voice in Minsk (Belarus), where he participated as a soloist and a composer, and where his composition Cherub song won many audience sympathies.