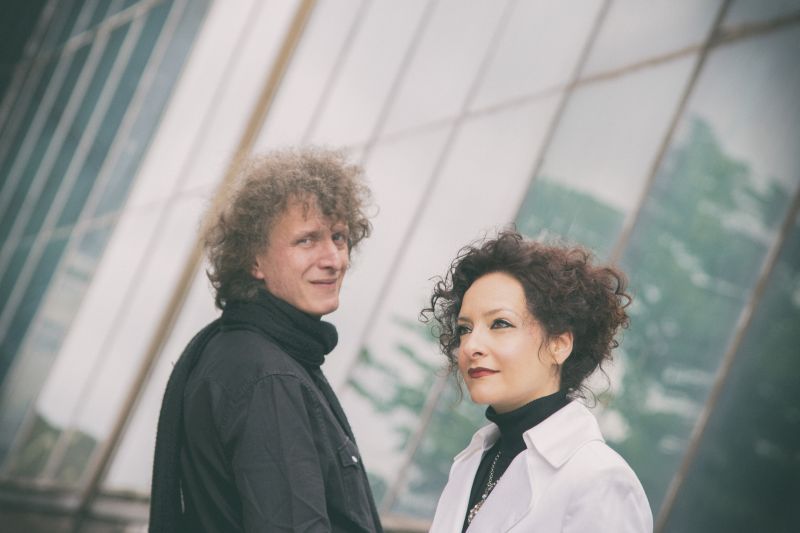 Nataša Mitrović and Nenad Kačar started performing together in 2017 and since they regularly play concerts in Serbia and Croatia.

Biographies:
Pianist, is a native of Belgrade, Nataša Mitrović received her undergraduate and graduate degrees at the Faculty of Music in Belgrade where she now teaches piano. Further studies included studies in Vienna with prof. Avo Kouyoumdjian and piano studies with prof. Jan Novotny in Prague. Nataša Mitrović was the only artist from Serbia to be awarded Fulbright scholarship in year 2004. During her Fulbright grant, Ms. Mitrović studied at the University of Michigan (Ann Arbor), at Julliard University (New York) and at de Paul University (Chicago) where she performed extensively with great acclaim. She has won many prizes for piano performances in Serbia and abroad among others Special prize “Emil Hajek” for the best pianist at the Music Academy and October prize of the city of Belgrade for the highest achievements in music. She has performed 15 times as a piano soloist with all major orchestras in Serbia and also with the Bulgarian Philharmonic and the orchestra in Montabaur in piano duo with pianist Swetlana Mermann. She has given recitals and performances in France, Italy, the Czech Republic, Macedonia, Bulgaria, Germany, United States, China and Kuwait. She was a lecture performer on 31st Fulbright Conference in Beijing (China) in October 2008 representing Serbia. She often plays as a member of various chamber ensembles. She has recorded for television and radio in Belgrade, Novi Sad, Macedonia and with RAI, in Italy. Nataša Mitrović had very successful serial of performances with soprano Eleanor Valkenburg in Belgrade performing Serbian and American composers in Serbia and United States of America. One of the concerts was in Kennedy Centar in Washington, DC (in April 2009.) She is a member of Fulbright board in Belgrade.

Croatian pianist and pedagogue Nenad Kačar (Zagreb, 1965) has been involved with music since his early childhood, and as a five-year-old, he had his first public performance. During his schooling he obtained prestigious national scholarships. He studied and graduated at the Zagreb Academy of Music in the class of a prominent Croatian pianist and professor, academician Jurica Muraja, and continued his training with numerous pianists, E. Timakin, M. Lorković A. Preger, R. Kerer, M. Farre and I. Žukov. He has performed in almost all major music centers of Croatia as well as in numerous European countries (Slovenia, Italy, Germany, the Czech Republic, the Netherlands, Belgium, Sweden, Bulgaria, Macedonia and Russia, etc.). Kačar recorded for various domestic and foreign radio and TV stations. In the field of chamber music, he has collaborated with a number of prominent musicians, conductors, ensembles and orchestras. Since 2017 he has collaborated in piano duo with pianist Nataša Mitrović. In March 2019, at the Croatian Music Institute in Zagreb, he performed with the Croatian Chamber Orchestra and conductor Diana Tchobanov, also performing, with great success, the solo part of the Mozart Concert K.V.466 which will be released on CD. Since 1987, he has been engaged in pedagogical activities and, with results, he presents the range of Croatian piano pedagogy. Regularly, his students are winners of numerous competitions, winning first prizes at domestic and international competitions (more than 200), performing at a number of well-publicized performances and concerts (over 540) and participating in media events in a dozen European countries (Russia, USA, Italy , Germany, Austria, France, the Netherlands Macedonia, Bosnia and Herzegovina, Serbia, Slovenia and Croatia). He is a longtime chief of the piano department of the Academy of Music Zlatko Baloković. He is a mentor to numerous young pianist pedagogues until they are prepared for the professional state exam. He has held a series of professional seminars, masterclasses and lectures in Croatia, Europe and Russia. He was invited as a member of the jury for many international piano concerts. He publishes professional works in the field of piano pedagogy and piano methodology. Kačar is a member of EPTA Croatia and the HDGPP Association. Since the school year of 2009/10, he has been a guest lecturer to the students of the 4th and 5th year of the Music Academy in Zagreb, within the framework of Pedagogical Practice Crouse. Based on the results achieved, the Ministry of Science, Education and Sports and AZOO nominate him and promoted him into a mentor-professor in 2011 and in 2016 as professor advisor. His artistic pedagogical work was rewarded with numerous awards.