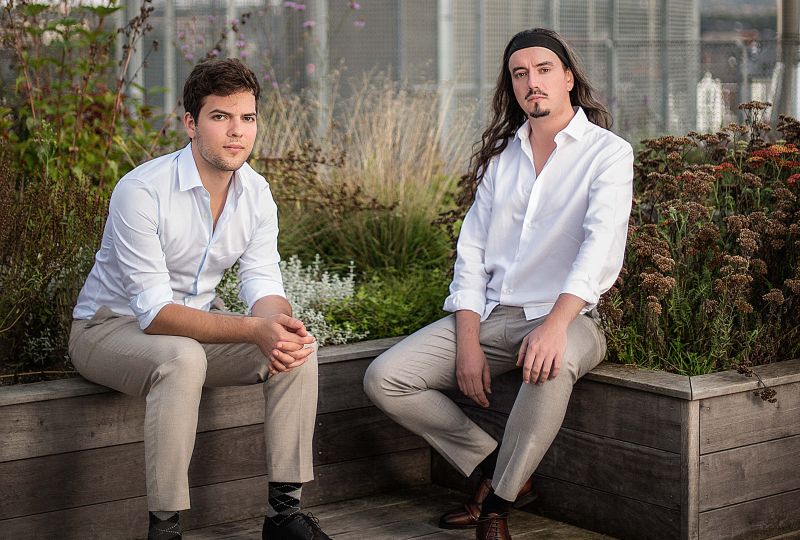 The fruit of a musical encounter in July 2016, in Orford area, the J² duet is composed of the violinist Jean-Samuel Bez and the pianist Jean-Luc Therrien. Less than one year after their setting up they have been awarded in April 2017, the highest reward (First Absolute Prize) in the Luigi Zanuccolli International Contest (Italy). Since then, the duet would regularly play in concerts in Europe (France, Austria, Italy) as well as in North America.

Biographies:
Born in Pontarlier (France), the violinist Jean Samuel Bez started playing the violin thanks to Krystina Mugica. Attracted pretty early by chamber music, he very soon became a regular of the local scenes and has been playing in various festivals. Showing already a deep interest in the contemporary creation, he was the dedicatee, in 2005, of Bichromie, quintet by Guy Leclercq. In the following time, he would be awarded unanimously first prizes of excellence and virtuosity in the Conservatory of Music of Rueil-Malmaison before integrating the Royal Conservatory of Music of Brussels (Belgium) in the class of Veronique Bogaerts. There he passed his diplomas with High Distinction and was granted the Pappaerts Prize in 2016, as a reward for an exceptional academic path. He perfected then in the Universitat fur Musik und Darstellende Kunst in Vienna (Austria) with Michael Frischenschlager.
Jean Samuel is the laureate of numerous prizes, scholarships and international competitions including the Jury Prize in the International Music Competition in Malta (2015), the Hanseez- Castilhon and Horlais Dapsens Prizes in Brussels (2016), the 1st Prize in the Svirel International Music Competition (Slovenia, 2017) and 1st Prize in the Luigi Zanuccoli International Music (Italy, 2017). He has played several times as a soloist : with the Ensemble Orchestral of Dijon (France), the University Orchestra of Burgondy (France), the Budweis Philharmony (Czech Republic) and the Sotiropoulos Camerata of Brussels (Belgium), interpreting among others the concertos of Bach, Beethoven, Mozart, Tchaikovski and Wieniawski.
His passion for chamber music, strengthened at the contact of eminent musicians such as Manfred, Danel and Pražac quartets, brings him to play regularly within various groups throughout the world (Belgium, Austria, France, Switzerland, Poland, Italy, Scandinavia, Russia, Canada, China, Taiwan…) During the last few years he had the opportunity to play side by side with Jean-Claude Vanden Eyden, Hagai Shaham, Gil Sharon, Istvan Varga, Michel Lethiec or Marc Grauwels.
Sensitive to the importance of the creation and the spreading of the contemporary repertoire, Jean- Samuel intensely invests himself in the work with the composers. In 2015, he was the laureate of the Young Bozar Project within the Alternative Violin Duet 2Vaino. With this duet he focuses on searching new alternative formulas to tradional concerts, mixing arts and means of expression. In a rather different domaine, he also plays regularly within the Icelandic group Arstidir. Besides he has done a training course of composer, specially studying Harmony, Counterpoint, Analysis and Fugue; he was unanimously awarded three Firt Prizes and one special Prize of the SACEM.

The brilliant young Canadian pianist Jean-Luc Therrien believes his job as a musician is to cross barriers – of language, of culture, of time. That work has taken him throughout Canada, Europe and Asia. And wherever he goes, he creates a shared musical experience that for him is a form of spirituality. Jean-Luc grew up in Repentigny, a quiet suburb on the north shore of Montreal. The house was full of music – his seven older siblings all took lessons, and with two pianos going full-tilt at practice time, cacophony reigned. He started lessons at 6 (his parents figured it would be a good way to help him focus). By 7 he was giving recitals and starting to win regional and national competitions. He fell in love with the classical concert experience attending performances by the Montreal Symphony. He was enchanted by the magic of being one of thousands in a concert hall, deeply connected, watching and listening in silence. He loved music, but he hated practicing. It wasn’t until he went to the Conservatoire de musique de Trois-Rivières and met his teacher, Denise Trudel, that he learned to love playing and practicing the piano. She taught him how to listen for and uncover “the sound” he was looking for, how to create colours, how to achieve perfection in phrasing.
From Trois-Rivières, Jean-Luc headed for Europe and the University Mozarteum in Salzburg, thanks to a major grant from the Canada Council for the Arts. There he reveled in the musical heritage of Haydn, Beethoven and Schumann,  immersed himself in the sonic world of the 20th century – Prokofiev, Debussy, Stravinsky – and delved into baroque composers such as Bach and Scarlatti.
He returned to Canada and entered The Ihnatowycz Piano Program at The Glenn Gould School in Toronto where he worked with another important musical mentor – Marietta Orlov. She helped prepare him for the psychological and technical demands of being a professional musician, honing the skills necessary to deliver his musical ideas on the piano.
The recognition has poured in: he’s won the Mauro Paolo Monopoli Prize Competition in Italy, the CMC Stepping Stone and, with violinist Jean-Samuel Bez, the Chamber Music Grand Prize at the Luigi Zanuccoli International Competition in Italy.
Jean-Luc was named one of Canada’s 30 hot classical musicians under 30 for 2020 by CBC Music. And his first solo album, just released on the Label Orpheus Classical in 2021 featuring Debussy’s 1st Book of Préludes and his own transcription of Liszt’s Poem Symphonic Les Préludes, was chosen as one of the best releases of 2021 by CBC Music.
This season he’s part of The Rebanks Family Fellowship and International Performance Residency Program at The Glenn Gould School in Toronto. This winter, he’ll be touring as part of Debut Atlantic. And then it’s back to Europe with violinist Jean-Samuel  Bez to launch their first duo album with concerts and masterclasses in Ukraine, Austria, France and Belgium.
Jean-Luc compares the work of a musician to that of an architect – using some of the same skills to ‘’design” and structure a musical interpretation.
“With music, I can spend hours and hours working on a piece and decide which aesthetic, colours, sound and emotions I want to express with it,” he says. “Music feels like the best way to express myself. I want to share beauty and truth with others. Classical music has touched me the most. I want people to know that, yes, it is still relevant today.”