In Between the Plates, Mika Taanila’s solo exhibition 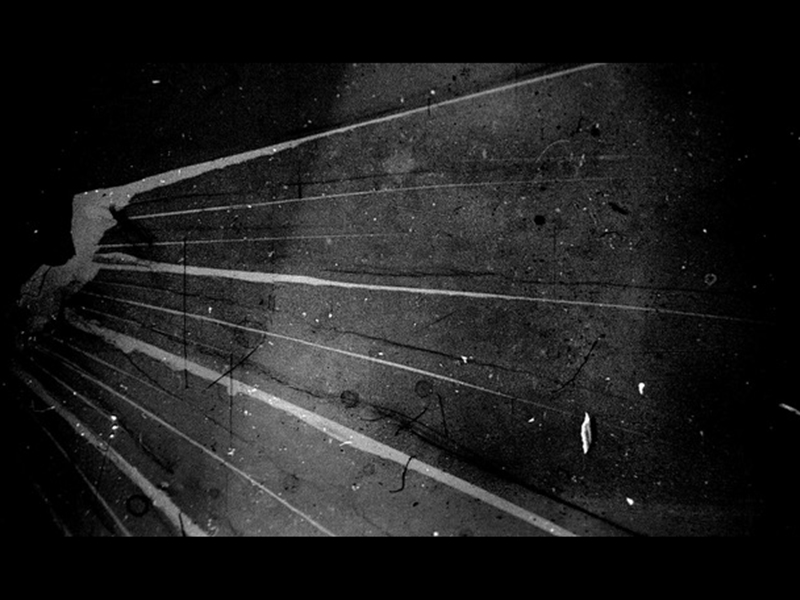 Catalogue of the exhibition can be downloaded here

Mika Taanila’s solo exhibition “In Between the Plates” will offer an insight into the body of works which meet and intersect in the area of visual and sound research, from status and displacement of the media image, to the emulation of the media environement of the human life, its coherency and its dispersion. The subject of the film “Tectonic Plate”, an individual lost in the vacuum between time zones, tectonic plates, flights and beds, presents the discrepancy between the human consciousness and the evergrowing pressure of the integrated media systems and pace of obsessive productivity. The space between the “plates”, the liminal space of unexplored relations and power of images, movement and sound, the resound and associations, is where we situate the first solo exhibition of Mika Taanila in Belgrade.

The Sad Song of the Hard-Edge Transition Wipe Markers is the introductiory piece at the exhibition and it also gives the sound to the first part of the exhibition space. It is a specific found footage piece, giving a new context and new positions to the marginal media fragments. Patent Nr. 314805 is also using found footage and sound material originally recorded by Eric Tigerstedt with his invention the photomagnetophone. Physical Ring uses an anonymous recording of a science experiment, and operates with our receptive inertia, which can inscribe a significance into a decontextualized visual material shot without primary aesthetic intention, but without knowing its purpose, the imminent beauty of the hypnotic visual dance of the objects and invisible elements is exposed, and its mysterious allure. The video The World is re-using media material, this time from a feature film, and it destablizes the film experience itself, by reversing the image as an indication of the pressure of the “falling” world. With Branches and Delay of Game we are entering the field of experiments in the re-activation of media materials, and the media image, having its status, shape and function destabilized, becomes an evolved autonomous visual experiment. In the finale of the journey through Mika Taanila’s work, the most challenging of them, Tectonic Plate, takes us through the experience of a traveler, crossing the borders of time zones, nights and days, movement and sleep, which is reflected in a new narrative form, of the thoughts, words and feelings woven into the information boards, digital messages, schedules and soundscapes of the transition spaces, planes, and non-places. Tectonic Plate is a collaboration between Taanila, author Harry Salmenniemi and electronic music pioneer Mika Vainio.

The experiments in the field of the re-activation of media fragments, the destabilization of cinematic conventions, the emulation of the dispersive narration of the integrated media system – all these works of Mika Taanila give way to a re-examination of the status of the image. The play with the co-relation between the realms of the mediatized and sensed relies on the capacity of the human curiosity to re-examine the nature of the information and the status of the images that construct the world today. Having the experience of the global COVID 19 pandemic in 2020-21, the intensive mediatization of social relations and isolation, the works of Mika Taanila arrive to a point where the people who enter this exhibition will share more of his curiosity towards the nature of media images than ever before, and make new paths in this collage of Taanila’s research and artistic achievements.

Dejan Vasić is an art critic and independent curator based in Belgrade, Serbia, currently
working as a visual arts program curator at the Center for Cultural Decontamination in Belgrade. He is co-editor of Beton (cultural propaganda kit) and an active member of AICA, The International Association of Art Critics. In the past, he was a member of Kontekst Collective (2009-2013), the Culture of Memory curatorial platform (2010-2014), and the Four Faces of Omarska Working Group (2010-2015). His research and curatorial projects were part of public events and exhibitions (selection): Gathering Around the Wreckage, Oliver Ressler solo exhibition (Cultural Center of Belgrade, 2020); Art, Critique and Politics (CZKD Center 2017-ongoing); Performance, Performativity, and Document (SULUV Galery, Museum of Contemporary Art Vojvodina, 2018); Four Faces of Omarska (DokuFest, Prizren 2014; Forensis, HKW, Berlin 2014; October Salon, Belgrade 2013; Gallery of Contemporary Art, Sarajevo 2013; Academy of Fine Arts Vienna, 2013; UrbanFestival, Zagreb 2012; Center for Research Architecture, Goldsmith University of London, 2012; Museum of Contemporary Art Belgrade, 2010; SpaPort Biennial, Banja Luka, 2010); The Culture of Memory (GPL Contemporary, Vienna 2014; PM Gallery, HDLU Zagreb 2014; Mediterranea 16, Young Artists Biennial, Ancona 2013; Biennial of Visual Arts, Pančevo 2012; Cultural Center, Šabac 2010). The focus of his interest is an art as a critical and political practice, affirming critical thinking as a public good.

Aleksandra Sekulić is PhD candidate at Faculty of Media and Communication at the department of Theory of Art and Media.
MA in Cultural management and cultural policy in the Balkans, UNESCO Chair, Interdisciplinary studies, University of Arts, Belgrade and Universite Lumiere Lyon 2. Master thesis: »Archiving as a cultural form: creating video archives and databases«, mentor: prof. Milena Dragićević-Šešić, University of Arts Belgrade; consultant in the research: Gabby Wijers, Time Based Arts Institute, Amsterdam; the thesis defended in November 2008.
Graduated in General Literature and Theory of Literature in Faculty of Philology, University of Belgrade in 2004.
Program curator at the Center for Cultural Decontamination (CZKD) in Belgrade since 2010. Major projects and programs are: CZKD Cinema, Visual art program Deshaping, The Context Studies, Pertej/Beyond/Preko 20 Years, En Garde, Avant-Garde 20/21.
Together with Branka Benčić curated exhibitions Video, Television, Anticipation at the Museum of Contemporary Art, Belgrade (2013) and Museum of Contemporary Art, Zagreb (2014), MAFAF – The Invisible History, A Look From Belgrade, CZKD (2011), Slobodan Šijan: Film Leaflet, CZKD, Belgrade; MMC LUKA, Pula 2012; and Theme program Solidarity As Disruption at International Short Film Festival Oberhausen in 2021.
Since 2006, member of the archive and program platform Media Archaeology. Produced a documentary on National Television of Serbia: Media Practices of the Youth in Socialist Federal Republic of Yugoslavia.
2005-2008 – program editor of Academic Film Center of the “Students’ City” Cultural Center (AFC SCCC) in Belgrade. Editor of the publications (selected): Performing the Museum – The Reader (2016). Co-editor with Dusan Grlja, collection of essays of the collaborative project Performing the Museum, Museum of Contemporary Art Vojvodina, in cooperation with Museum of Contemporary Art in Zagreb, Museum of Modern Art Koroška and Fondacion Antoni Tapies, Barcelona
Videografija regiona/Videography of the Region (2009) collection of essays; Belgrade: DKSG
Medijska arheologija. Devedesete/Media Archaeology: The Nineties (2009). Belgrade: CZKD, DKSG